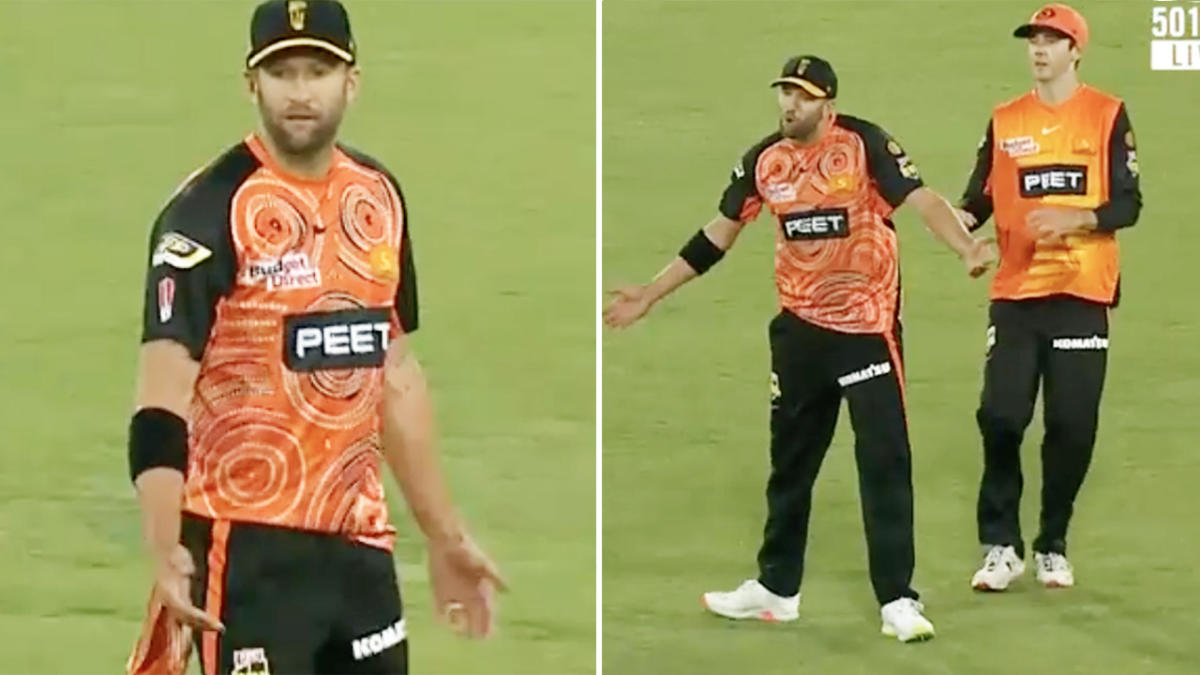 There were extraordinary scenes in the BBL on Tuesday night when Andrew Tye was removed from the bowling attack by referees after two dangerous deliveries.

In action for Perth Scorchers vs. Sydney ThunderTye fired Sam Billings for 67.

‘DO NOT KEEP IT’: England players are under fire over action after the match

However, he never managed to complete the overflow after bowling two dangerous no-balls above waist height in his next three deliveries to Alex Ross.

The referees were forced to remove Tye from the bowling attack, leaving the Scorchers star smoking.

Under the cricket rules, referees are allowed to take bowlers out of the attack if they bowl more than one delivery that is considered dangerous.

“What’s going on here Andrew Tye?” Isa Guha said in a comment to Fox Cricket. “Two above the waist high.”

Tye had an animated conversation with the referees on the court before accepting his fate.

“He only has himself to blame,” Symonds said.

“He’s in control of it. It’s not like someone else did it to him. He’s bowling the ball. It’s whether it’s considered dangerous or not.

“The first was enough. The second disappeared (to the limit), but still.”

Brilliant batting from Billings and Jason Sangha helped the Thunder claim their biggest win of the Big Bash League season, beating the previously undefeated Scorchers at the Manuka Oval.

After posting 7-200 after being asked to strike first, the Thunder found big early wickets – including the red-hot Mitch Marsh – to finally claim a 34-run victory on Tuesday in front of 9740 fans.

Billings and Sangha met in the middle at 2-23 and immediately took control, adding 113 to the third wicket in the decisive partnership of the match.

Man-of-the-match Billings drove beautifully for four from his first ball and quickly drew another boundary, but an elegant back foot cut to Ashton Agar’s spin confirmed the Englishman was on singing.

Sangha, who finished with 56 not out of 46 balls and played a steady round, allowed his English partner to go ballistic at the other end.

Billings’ 67 of 35 balls included 10 fours and two sixes, the highlight being a monstrous six, where the ball hit the roof of the Bob Hawke Stand and ended up outside the stadium.

Faced with a scary chase, the Scorchers’ innings could not have started worse with opener Josh Inglis being thrown by Saqib Mahmood for a golden duck with the other ball in the inning.

The shapely Marsh reached just six before chipping Nathan McAndrew to deep midfield, and Kurtis Patterson joined him in the sheds three balls later to leave Perth with 3-17.

The Scorchers stabilized somewhat but were never in the frame, helping only to 8-166 out of their 20 overs via a classic 64 not out of Colin Munro and a quick 44 of 25 balls from Tye.

“Sam Billings, he’s in really good shape, and something about this little (isolation) thing where he’s sitting in his own room, we do not mind,” said Thunder captain Chris Green.

“(Sangha) has potentially been hit in the red ball format, but the way he comes out in his last three innings, he has really enjoyed that opportunity.”