In May 2021, when images of hundreds of corpses floating in the Ganges River, like several others, went viral, artist Jayasri Burman was shocked. “It was an eerie feeling,” says the Delhi-based artist. She adds: “Since no one is allowed to touch the bodies of Covid patients, those who had no choice and with access to the river threw them there in the hope that the river will help them get moksha. The river eventually washed away the bodies. She is brave. She is mistreated, but she doesn’t expect sympathy, she has the power to take care of herself.”

It is this determination and resilience of the river that she has depicted on her stark 84×216-inch canvas titled “Jahnavi”, depicting bodies floating in the Ganges. However, the river remains pristine in white. The charcoal work is one of several that are part of the exhibition entitled “River of Faith” at Bikaner House in Delhi. “While the world waits to rediscover normality and happiness, leaving behind the sadness and shadows of the past two years, the River of Faith would be a beautiful tribute to the river and serve to gently remind us to recover. of balance and tranquility in our lives and rests our faith in nature and its powers,” said Somak Mitra, director of the Art Exposure gallery in Kolkata, where the exhibition will move after it ends in Delhi on December 19 and will last until March 2022. 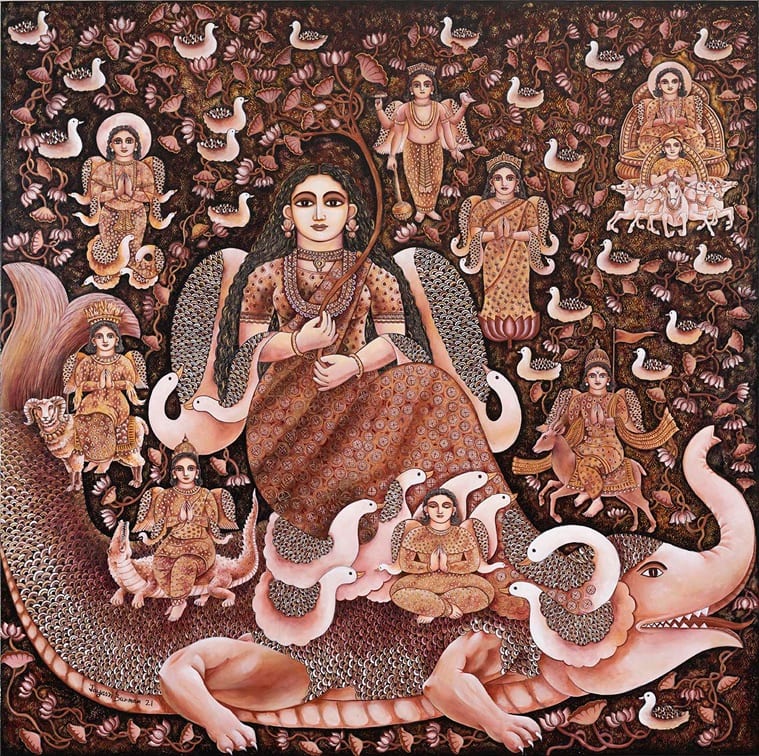 Born in Kolkata, Burman recalls visiting the Ganga ghat with her parents for Lakshmi-pooja. “I was about six to seven years old and remember noticing people’s faith, that deep sensitivity and belief in the primal power,” Burman says. As a child, she also often listened to mythological stories, which perhaps sparked her interest in the subject, which eventually manifested itself in her artworks. Usually focusing on goddesses, her images combine myth and mythology to tell of gods who have braved adversity. “These stories are also relevant to our lives. They have lessons for us about the truth of life. For example, Urja Vati has green on her back, Adrika carries the fish, Saraswati is Asawari, who brings music and culture,” says Burman. She adds, “My parents had a deep reverence for Mother Nature and they taught us to enjoy and respect her bounties.”

The current exhibition is the result of years of research and her observations of the Ganges in the many places where it flows, from Banaras to Hrishikesh. While the river may also have been politicized more recently, Burman says, “With my work I want to spread the message that it is a circle that we all inhabit, and only if we cherish nature and not let it suffer will humanity be able to his harmonious life.”