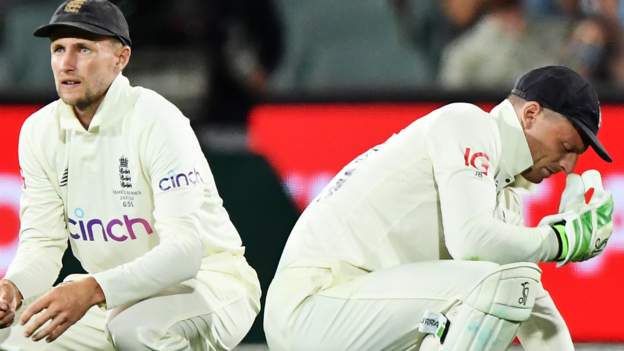 In loving memory of English cricket who died (again) in Melbourne on 28 December 2021.

Deeply regretted by a large circle of grieving friends and acquaintances. REST IN PEACE.

The body will be cremated and the ashes will remain in Australia.

OK, so maybe this latest England defeat at the hands of Australia will not be met with horror at the loss at The Oval in 1882. You have to go back to before the First World War to find a time when England regularly won down under, so it’s not surprising , that the tourists have been beaten once more.

However, it is the weak way in which Joe Roots’ side has surrendered that gives a strong sense of sadness over the condition of the English test team.

It was the psychiatrist Elisabeth Kubler-Ross who theorized that grief comes in five phases.

To have seen England in recent years is to have experienced them all.

England has been in decline for the best part of a decade, a mediocre side hiding in plain sight.

Still, the denial has been helped by a long unbeaten home record and the individual brilliance of a few world-class players.

The signs were there. Only two teams – Sri Lanka and South Africa (both twice) – beaten away since the start of 2013, only Root and Alastair Cook averaged more than 40 with the bat in the last decade, an excessive reliance on James Anderson, hot – to shoot the gloves from keeper to keeper, improper handling of spin, a slip-cordon is more likely to catch cups than an edge.

The cracks have really started to open in the last 12 months. A victory in 12 tests, the worst home summer since 1999, fell short of the proud undefeated record in the UK. No team has ever lost more matches in a calendar year than England’s nine in 2021.

Nothing causes introspection in English cricket as an Ashes defeat. It was only a Ben Stokes miracle at Headingley that prevented Australia from winning the series two years ago.

Now it’s all exposed. The denial can no longer continue.

But most of the anger is directed at a domestic system that is perceived to leave batteries ill-equipped to cope with the demands of the test cricket. “The Hundred”, “ECB”, “county” and “Tests” were all trending on Twitter on Tuesday morning.

And while it’s true that meeting Darren Stevens on a sticky dog ​​in Canterbury in April is a different sport than Mitchell Starc pushing the ball up Gabba’s nostrils, it’s not as simple as blaming it all on the county. calendar.

It is certainly not a problem unique to England that players on the national team play little or no red ball cricket outside the test arena.

And the first-class game has still allowed players to put together a decent piece of work to get a test call.

Dom Sibley made nine hundred across two years before his election in England, Rory Burns had five consecutive seasons with more than 1,000 races, and Ollie Pope has taken advantage of hitting on The Oval for most of his career by having a first-class average in profit of 51.

At best, all three have stood still since being called up by England. At worst, it’s hard to argue that they have not gone back.

Further back, Keaton Jennings, Sam Robson, Adam Lyth and Nick Compton all made a hundred early in their test careers before disappearing.

The county structure is far from perfect, but would not need much tweaking to improve. Is it not a major concern that England, with an army of backrooms, are not making the players better?

This latest embarrassing episode in English cricket history can be compared to another chastening moment down below, the first round exit from the 2015 World Cup. Root himself has noticed the parallels.

In response, England took one-day cricket seriously, set out their stall to win the 2019 tournament and did just that.

But there is no such thing as a free lunch, and the purchase for that success has been a major blow to the test team, either in terms of the tank-wide distance between Jonny Bairstow’s bat and pillow, or the hunt for a World Cup double in which players were omitted by test but kept fresh for a T20 tournament England did not win.

This does not mean that red-ball and white-ball success cannot be achieved at the same time. Australia have won the T20 World Cup and Ashes in six weeks, while New Zealand are world champions in testing after making each of the last 50-over and 20-over World Cup finals.

England have also had to make choices in a Covid era where they have played more than any other team.

The purchase to keep the show on track in a time of bubbles, isolation and quarantine has been to rotate players, which Root admitted was to the “detriment” of performance in India as the results really began to unravel.

Past, present or future, England can give rise to depression.

Currently? In their last 29 away tests against India, Australia and New Zealand – the world’s three best teams – England have won only once and suffered 21 defeats. In the last five years alone, they have been thrown out in a single session on five occasions, one of which was by Ireland.

The present is trying to stay awake in the dark winter nights, only to have your dreams pursued by Cummins, Starc and co. The rustling of Burns’ bone stump, Jos Buttler’s iron gloves, yet another Australian fast bowler picked from nowhere to deliver target-seeking missiles on the edge of English bats.

The future? Try not to think about Jofra Archer’s elbow, or the lack of opportunities to release Root from the captain.

And no matter what you do, do not think about what life will be like when Anderson retires.

Perhaps the best way to deal with this is to accept the fact that England are not very good at Test cricket and that there is more pain on the way before things are likely to get better.

Anything other than defeat in the last two Tests in Australia would feel like a good result, after which England could be looking for a new captain, coach and the majority of a team.

How many of the current line-up are set to face the Caribbean this spring? Root, Stokes, Ollie Robinson, Mark Wood and probably Dawid Malan. Anderson and Stuart Broad will be in the mix if they want to be, but England must see every series they remain available as a bonus.

Then comes a home series against New Zealand and the rearranged fifth Test against India, both of which were better than England last summer, before the visit of an improving South Africa, which looks far from a gimme.

Next winter includes test series in Pakistan and New Zealand – England will not start as favorites either – until the next Ashes in the UK in 2023.

By that time, England will not have lost a home series to Australia in 22 years. Right now, that record seems to be in great danger.