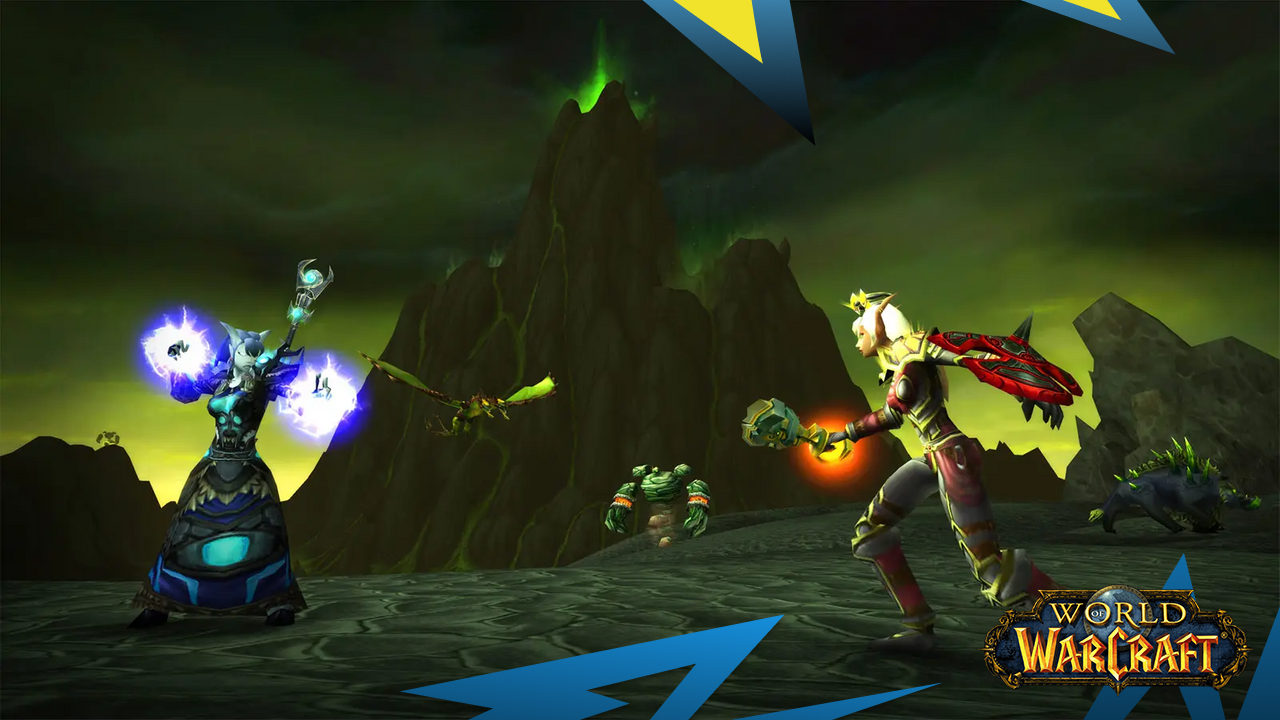 WoW Classic TBC Phase 2 continues to push as raids challenge the powerful Tempest Keep and Serpentshrine Caverns. But it’s not the only classic WoW gameplay going as the WoW Classic Season of Mastery is about to begin!

With new raids, changes, gear and much more around between Season of Mastery and TBC – this is where we rank the best DPS, Healers and Tanks between the two.

WoW Classic Season of Mastery is finally ready to go live, bringing Blizzard’s first take on Classic + – with major changes, including the removal of World Buffs, the addition of a 40% quest experience and more.

To read more about where we think WoW Classic Season of Mastery classes land among the best DPS, Healers and Tanks – check out our rankings here.

WoW Classic TBC Phase 2 has arrived and the first week of Serpentshrine Caverns and Tempest Keep is in the books. More importantly, they are also in the logs.

So how does our WoW Classic TBC class placement change in Phase 2?

The DPS level list has experienced very little change – with the Warriors a bit on the rise, but the top 3 of Hunter, Warlock and Mage remain strong.

The Healing tier list has seen some changes – Resto Shaman remains the primary helper healer, but priests have begun to win on the crude side.

The tank tier list sees very little change in TBC Phase 2 – with the Warriors remaining the best single goal tank, the Paladins remaining the best AOE tank, and the Feral Druids doing enough of both to always fill a useful raid slot, while DPSs on battles where a bear is not necessary.

WoW Classic TBC brings a wide range of content to both PVE players and PVP players.

This includes Heroic Dungeons and 3 Raids for PVE, as well as Arenas and Battlegrounds for PVP.

For PVE, this means lots of parse data in various raid settings from Karazhan to Gruul’s Lair and Magtheridon’s Lair.

So who wins on the pars?

At the very top of the DPS pile, the Warlocks and Hunters regularly fight for supremacy, with the Hunters leading everyone so far.

On the healing side, it seems that the most dominant healers in WoW Classic TBC are Restoration Shaman and Restoration Druids.

For thought, it is much harder to evaluate as each spec has a different direction. Protection Paladins will be the best tanks in AOE situations, Protection Warriors in single-goal situations, and the Feral Druids bring a middle ground to both as something of a multi-tool.

With lots of new spells, new talent trees and a whole new expansion ahead – the classes of World of Warcraft have been shaken to Classic TBC.

So which class are you going to play in The Burning Crusade?

Let us divide each one into their strengths and weaknesses and assess their success in PVE and PVP.

One class that is definitely looking forward to the WoW Classic TBC is the Druid.

Druid players have massively expanded capabilities in TBC that let them fight in PVE and PVP environments, with an added emphasis on PVP success.

TBC pushes Balance druids advance by enhancing the Moonkin experience from the OOMkin pains from Vanilla WoW and giving them Insect Swarm. Wild (cat) druids also get some extra power in their bleeds (and no debuff cap to hold these back), and are flexible Arena competitors. However, some new changes to Power Shifting will take some getting used to. Wild (bear) druids are as successful as ever, despite some new tank competition and some nerfs. And finally, Rest druids are kings in the TBC Arena, and get a huge boost in PVE with 1 healing over the time limit removed in the expansion, which means more Rejuvenations can be stacked.

Another class that fights in Vanilla WoW but gets a big glow in WoW Classic TBC is Hunter.

In Classic TBC, Hunter will be the most dangerous DPS in PVE next to Warlocks, and in a much simpler way.

Hunters definitely take over in The Burning Crusade, being able to fit their entire rotation in a button thanks to a simple macro. While other specs can still be played, BM will rule every time.

Hunters also bring some useful spells to PVP in the Arena and no longer have to worry about the death zone, which has been removed in TBC. With a lack of instant CC, but since traps are still only melee – other DPS options miss them in PVP.

Mage has never been a bad choice throughout WoW’s history, but TBC is not their brightest moment in PVE.

WoW Classic TBC opens up some new avenues for magicians, including using Exciting spec. But many will remain true to themselves Fire, and it will not be a bad choice in PVE, even if it is not the top caster as it was in Vanilla WoW. Mage has a huge place in PVP with Frosts incredible control, and more incantations open the doors for Mages to really go up in the Arena setting.

The biggest improvement from Vanilla WoW to TBC is in Paladin, and for Horde players, you finally have the opportunity to use the Light along with the Plate armor!

Paladins finally have options in The Burning Crusade. Retribution picks up more incantations and consistency, even though it’s still under the hit list. Holy remains one of the strongest healers in the game with one powerful help package who helps in Arena. However, the real MVP is Protection, which will probably be the best tank in the game in TBC!

Priest ran the show in WoW Classic healing and they are still pretty strong in TBC.

In TBC, healing priests receive ny AOE healing capacities and new strong buffs to Holy, and heavy flow in Discipline. To Shadow priests, the specification rounds out to be much more consistent, offers unsurpassed utility value for its DPS slot by recurring mana to others and increasing spelling damage taken.

Priests are not by far the best choice in PVE as in Vanilla, but they offer plenty of strength in PVP settings, especially in 3v3 Arena.

Rogues will have a mixed experience in TBC, one that may be lacking in comparison to Vanilla WoW.

Rogues in TBC will not be the threats that players might remember from Vanilla, but thrive in the Arena environment with their control and burst. In the end, though, an unfriendly extension to melee DPS feels even harder for Rogues.

The good news? You can strive for the legendary Warglaives by Azzinot, which some lucky ones will use to crush in both PVE and PVP in the playoffs.

Paladins are on their way to the Horde, but Alliance players can rejoice – Shaman is also coming to the Alliance in WoW Classic TBC!

Shamans are an incredibly powerful class in The Burning Crusade that brings the game’s most significant raid enchantment to the table – Bloodlust. They offer some very competitive healing with Shaman rest functions as raid heals with some spells that can also keep your tank up. Shaman also hang with caster DPS pack as Elementary, with some new ones solutions to their mana problems from Vanilla WoW. Finally, Shaman can also hang with melee DPS in TBC with Improvement offers massive burst potential. All 3 Shaman specifications are fantastic in PVP settings with strong utility in Purge and totems – and most importantly, are capable of Bloodlust in Arena!

Warlock may have clocked in just below some of the first DPS classes in Vanilla WoW, but they will be top dogs on the charts in TBC.

Warlocks will be neck and neck like premiere DPS choice in The Burning Crusade with Hunters, and bid a wealth of premium utility that raids can not be missed like Health Stones, Banish, Portals, Soul Stones and more. Each Warlock spec offers something in the talent tree – and with the debuff limit virtually completely removed, Warlocks is now free at DOT as they will. Warlocks will take advantage of this throughout TBC and push into Affliction to make it count before rounding out with other specs in later levels.

Now we land on Vanilla WoW’s golden child, the Warrior. The Warriors ran the show in the WoW Classic as the best option for both DPS and refueling. With game-bis items as early as Phase 1 thanks to Lionheart Helm, scaling was not a problem either, as they were the best right from the start.

In TBC, the Warriors get a reality check, as almost all classes and specs have caught up with them. Warriors will have options with debuff limits away and one new physical injury buff to play Arms instead of just Rage all the time, but you will struggle to get the same kind of DPS meter impact that you did in Vanilla. And in the end, Fury is likely to surpass Arms on DPS most of the time. Warriors have some extra perks in PVP, including the chance to stun by hit with maces. As Protection, while the Warriors are still one very viable choices, they are not the only tank choice anymore, which means finding your raid slot will actually be a challenge (unlike Vanilla.)

Which professions should you choose?

Professions are an important part of The Burning Crusade, and things are getting even more diverse for WoW Classic with the new Jewelcrafting and lots of changes.

To help you pick and pair your Burning Crusade Classic professions, we’ve broken them down here.