Literally, ‘Angeyum Ponnuthaan’ translates to ‘there too, just a girl!’ Madurai Pushpavanam Iyer would not have hidden his disappointment when he learned that his wife had given birth to their daughter Rajam.

Pushpavanam, a revered Carnatic musician of his day who lived until he was barely 35, is widely regarded as the father of MS Subbulakshmi – despite her claim that it was Subramania Iyer, a low-profile lawyer from Madurai. the ‘angeyum’ (“there too”) is a reference to MS Subbulakshmi (hereinafter MS) who was born about a year ago in Shamugavadivu, from Devadasi lineage. 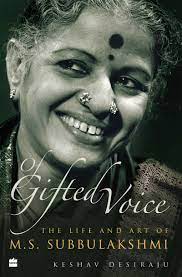 Rich in delicious nuggets like this late Keshav Desiraju’s Of Gifted Voice: The Life and Art of MS Subbulakshmi, is a compelling portrait of how twentieth-century women, including MS, have beaten the odds to become the most celebrated names in Carnatic music – a field seen as a den of Brahminism and patriarchy.

Concise but charming sketches about the lives of other female musicians and artists of the time – from Veena Dhanammal and Saraswati Bai to T. Balasaraswati, DK Pattammal, T. Brinda, ML Vasantakumari, NC Vasantakokilam, Rukmini Arundale, Begum Akhtar, Rajam Pushpavanam, and others – make the work an effort to place their lives in the context of MS as much as to situate hers in theirs.

Because it’s the fifth book on MS, maybe no one gave it much of a chance to say something that wasn’t already said. Maybe even less than what Pushpavanam gave to MS. The work is a remarkable attempt to spot the elephant in the room that others barely noticed before. The book promises to tell the story of MS the musician through an almost mathematical summary of the story of MS’s music; with the story of music in the life of MS; and the story of the lives surrounding MS’s music.

The work aims to explore and present MS as “first and foremost a classical musician of the highest order”. Desiraju has painstakingly searched the recordings and song lists from more than four decades of her live concerts, studio recordings, and the few films she starred in. Desiraju also highlights and presents how some of her concerts were received by music critics at home and abroad. Notes on her recordings and concerts, especially those given during the Madras Music Academy, and the endnotes to the compositions she often sang are an intriguing mix of historical information and Desiraju’s impressions.

However, in an effort to showcase MS, the classical musician, Desiraju repeatedly endorses the much-heard lament that MS shook off classicism as her music transitioned from her early years from concert singing to chants, to recording many “light pieces.” ‘ like bhajans in her concerts. Despite the strange musings on what classicism means in music, Desiraju sticks to the familiar script – that MS started out as a true classical singer, but gradually exchanged her classicism for devotional music; perhaps to please her growing and diverse audience. It is an attempt to remind everyone that the Bharat Ratna was a Sangita Kalanidhi first – sort of reclaim; an attempt to lock MS back into the mylapore bubble.

The book contains Wiki hyperlink-esque digressions – from technical aspects of music such as a comparison of the differences in handling Horn in Hindu and Carnatic traditions; to the evolution of the body taxonomies and the differences in the sampoorna and asampoorna melakarta schematics; to the history of the concert format, the lives of different vaggeyakaras that is, those composers who also tune in to their compositions; and those of the author and received impressions about the style and content of various composers, musicians and compositions, with Desiraju’s comic disregard for Patnam Subramania Iyer occur occasionally.

The book is a breeze. It is an enjoyable read – for those familiar with the Madras-Carnatic scene as well as for the curious. However, if one tries hard enough, it is possible to be creatively dissatisfied with the work – leaving enough room for another one MS biography.

For a work that otherwise contains a generous helping of personal impressions of Desiraju – including how unflattering he thought the spectacles of MS were – it is disturbingly quiet about his impressions of what MS’s life and music meant to the politics of the republic at the time. and what it means now. Reflections on the devadasi system, it is abolition, and ‘human rights’ are repeated, but each time fleetingly. The politics of the Tamil Isai Movement, MS and T. Sadasivam’s support for it, and the conflict the movement had with the Academy of Music have been brought in – but only to build up as reasons for MS not singing on the Academy seasons in some 1940s.

First, the book comes out when art, culture and, sadly, religion have been at the center of India’s political discourse. More pertinently, when Lord Rama is no longer the inclusive statesman who… Thyagaraja celebrated, but one that has become a symbol of a combative majority regime. It is without a doubt a challenge to project MS’s life onto current political events.

For an author who was a former civil servant and experienced the power play up close; and whose reflections on this aspect may have been valuable, this is a striking miss. There’s certainly plenty of clues in her public statements (admittedly, all heavily molded by Sadasivam). For example her Sangeetha Kalanidhi acknowledgment takes from two of Thyagaraja’s popular compositions’Kaddanu Variki’ (Todi) and ‘Sukhi Evvaro’ (Kaanada) to indicate that suswaram (good music) arises from the purity of the heart which sees no distinction between different gods and gods. Again, her declaration of acceptance of Bharat Ratna reflects once again on the need for Indian citizens to bury all their differences and shed hatred.

There is also a story I’ve heard about her that she clarified that the Rama she sings on’our Rama’ and not ‘their Rama’ just after singing her usual song’Rama nannu brova ‘ra during a chamber concert at the residence of Late Musiri Subramaniya Iyer at the height of the Ram Janmabhoomi movement.

Second, the somewhat succinct rejection by the work of modern feminist content in the life of MS is questionable. From running away from a devadasi household to follow her calling, to marry under the Special Marriage Act without the ritual of the kannikadhanam, to shattering one of the toughest glass ceilings of the time to become the first woman Sangeetha Kalanidhi, to accepting the award as the representative of the woman and on behalf of all women, there is still some room to enjoy creative reinterpretation, in short, of hagiographic revisionism. One can’t help but feel that the book is playing for Mylapore Tamil-Brahmin group think that: MS Amma had become their own and the few nonconformist aspects are aberrations that don’t deserve too much attention.

Nor does the book reflect enough on the magnitude of the moment when a woman born in a… Devadasi household collected the first Bharat Ratna of a performing musician from India’s first Dalit president – and that for excellence in an art form gradually occupied by the brahminic communities of the southern states. It speaks to the progress the republic had made over most of the now vilified 60 years. After all, MS and KR Narayanan were both examples of anulomam in their own way. anulomam, as Desiraju explains, in the context of music refers to the singing of the pallavic at gradually increasing speeds, where the thalam constant.

In a sociological context, anulomam refers to a person who achieves something higher than what is usually expected of him – for example, getting married in an upper-caste household, or, in the case of Narayanan, growing up to be head of state. Another interesting characteristic of MSs pallavic singing, what may matter is how she performed anulomam and always left pratilomam, the diametrically opposite musical idea where the composition speed remains the same for with the speed and number per beat in the thalam gradually increasing, for her daughter Radha to achieve. Was there a message there?

Overall, the book considers all controversies – including whether DK Pattammal should have gotten the Kalanidhi sooner; the real reasons behind Sadasivam’s relationship with the Academy during the years of the Tamil Isai movement; and the lengthy duel about whether or not shringara or not? shringara between the Rukmini Arundale and Balasaraswati currents, as digressions are best not allowed to deepen. The work presents MS’s music as music that was not only unaffected by these controversies, but was also in no way influenced or shaped by the political events after independence – including the emergency situation, the political success of the Dravidian parties in Tamil Nadu, and later, the rise of the Ram Janmabhoomi movement. In some cases, it also suggests that MS take the middle ground — for example, putting the framed photos of Rukmini and Balasaraswati on the same level in her salon.

Even more curious: Desiraju rejects her previous biographers attempt to translate and present MS’s letters to GN Balasubramaniam as ‘inappropriate’, because they have not asked for permission from the Member States – which is a fair comment. However, it is possible to think about their relationship and their mutual influences without the help of those letters – even though she has not formally learned any numbers from GNB. She presented Dharini Telusukontic at her concert in 1958, the year GNB received the Kalanidhi, with much of the trademark very nice which GNB is known to have incorporated into the Kriti – albeit for a different stanza. The loving tribute, to this listener at least, was striking, yet beautifully subtle.

To be fair, the book begins with the assumption that enough has already been said about everything else about MS and that it is her music that should be the focus of this work. It is quite another matter that the socio-political context in which one lives and loves does and should shape its music – even for MS. That story also deserves to be told, even if it has to be made first.

Prasanna S. is a lawyer from Delhi. He tweets @prasanna_s.