THE PERFORMANCE | You probably thought: “Whaaat?! This is freak. Kate Bishop goes to dinner with the enemy?”

And Yes, Kate’s Most Unexpected “Girls Night In” With Yelena Belova used to be freak. Freak Good, loaded as it was with winning dialogue as delicious as the smell of boxed mac-and-cheese.

Steinfeld had so far shouldered nearly the entire comic relief for this Marvel series, meeting Jeremy Renner’s grizzled veteran superhero with the audacity and spark of an eager newcomer. But with the arrival of Pugh as… Black Widow‘s Yelena – who was bubbling with excitement at both hot sauce and seeing the Empire State Building (while making it clear in the same breath that she could be kill you) – Steinfeld served as the straight(er) man for much of this delightful and at times hilarious nine-minute sequence.

“I mean you have must see the tree…. There is a Christmas market in Union Square. Not sure if these are suitable for the bloodthirsty vigilante type.”

Pugh went meanwhile Everything in with Yelena and her RussianHouse of Gucci accent, to a degree she didn’t already have on the big screen.

“The super-powered reindeer, Rudolph? He is SO strange.”

“YOU kill me?? Again, Kate Bishop, you are so funny. That’s hilarious. That’s the funniest.”

However, the dinner of the formidable enemies was not all fun and reindeer games. When the subject came to Clint (namely Yelena’s intent to kill the man she believes is responsible for her sister Natasha’s death), the ladies quickly got very serious as they exchanged several POVs as to why this former Avenger has a pass for his own should get very red ledger.

“You love him so much… it tells me you don’t know who he really is,” Yelena remarked, as Pugh leaned forward and her voice dropped to a chilling chill. But Kate stood by her mentor, while Steinfeld really sold the attitude: “He’s not perfect – nobody’s perfect – but he is good.” The two then reached an impasse and the two-handed ended, way, way too early for our liking. So entertaining was their response, we’re not sure if we really wanted them to fight it out or curl up on a couch for Disney+ and Chill.

It has been noted that this one is the new Hawkeye/Black Widow dynamic to look forward to in the MCU. To which we say: how fast can we pre-order our tickets? (And can we smuggle mac and cheese into the theater?) 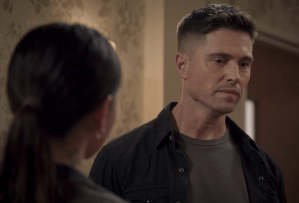 FAIR MENTION | Finding a gun hidden in his childhood home, the newcomerTim was willing to accept the fact that his father got away with murder years ago. But the truth turned out even Lake complicated—father had actually “broken half a dozen laws” to cover up the murder of her abusive husband by his mistress—and unpacking it completed Eric Winter’s best work yet. Facing a fierce James Remar, Winter explored that Tim felt betrayed by his father’s selective conviction of abuse. When Dad claimed his manners made Tim the man he is, Winter shot back: “I’m the person I am today despite yours!” After daddy’s wishes not well with his illness, Tim urged Lucy that, in his own demanding ways, he is not like his father. When a reassuring Lucy pulled the tough guy into a much-needed hug, Winter quietly conveyed every feeling Tim had cycled through in those fair few minutes. 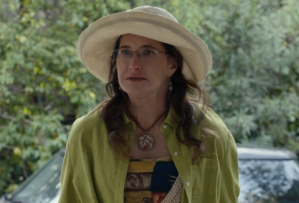 FAIR MENTION | Kathryn Hahn was the heart and soul of The Shrink Next Door, even when she shared the screen with powerhouses Paul Rudd and Will Ferrell. In the Apple TV+ mini series finale, Hahn deftly navigated both the tender side of the relationship between siblings Phyllis and Marty and the hostile aftermath of their 27-year estrangement. The actress unleashed a typhoon of emotion when Phyllis confronted Marty for trying to get back into her family’s life with a diatribe that was both heartbreaking and fiery. When she yelled, “You’re dead to me…I don’t ever want to hear from you again!” we felt the pain plastered across Marty’s face. But after watching Ike search her brother’s life, Hahn switched to radiate compassion and vulnerability, as Phyllis admitted he felt abandoned by Marty. With all its complicated family dynamics, the episode was the perfect showcase for Hahn to showcase both her comedic and dramatic talent. 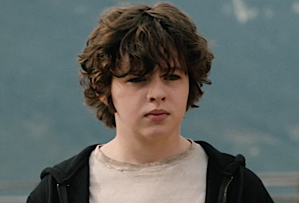 FAIR MENTION | since his Yellowstone Finn Little’s debut made a big impression. And in Sunday’s “Keep the Wolves Close,” he did it again, alternating between vulnerable and tough past his years with a seamlessness and authenticity that was heartbreaking. When Carter, flowers in hand, approached mother figure Beth to apologize for the offense that had landed him in the barn, his portraitist acted like a walking bruise, someone so used to being knocked down that it was a miracle. that he still got up. Once rejected, Carter shifted gears, with Little revealing the pain his character would have sworn he was hiding. Finally, after Beth asked what Carter’s dreams were, the bitterness that crept into Little’s tone spoke more about the problems the boy had seen than even the dialogue.

Which performance(s) has blown your socks off this week? Tell us in Comments!