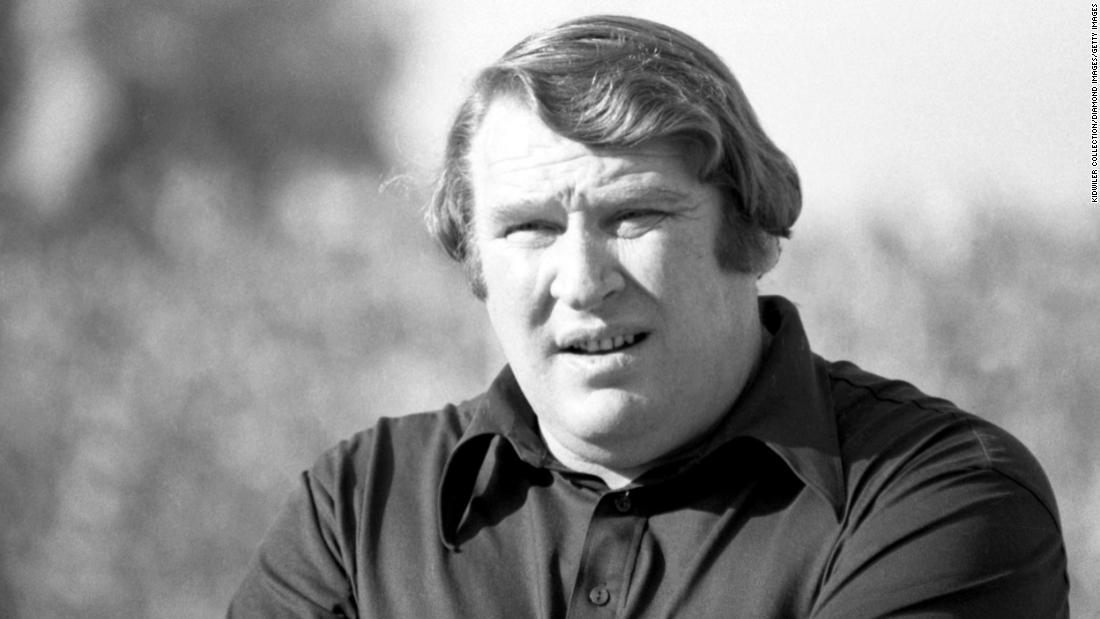 Share
Madden, 85, died unexpectedly in the morning, according to the league.
“On behalf of the entire NFL family, we extend our condolences to (wife) Virginia, (son) Mike, (son) Joe and their families,” said NFL Commissioner Roger Goodell. “We all know him as the Oakland Raiders Hall of Fame coach and broadcaster who worked for every major network, but most of all, he was a devoted husband, father and grandfather.

“No one loved football more than coach. He was football. He was an incredible sounding board for me and so many others. There will never be another John Madden and we will forever be indebted to him for all he did to make football and the NFL what it is today.”

During his 10 seasons as the Raiders’ coach, Madden’s teams never had a losing record and he led Oakland to the playoffs eight times. In January 1977, the Raiders won Super Bowl XI, beating the Minnesota Vikings 32-14, led by Madden.

In a statement, the Raiders said: “Few individuals have contributed as much to the growth and popularity of professional football as Coach Madden, whose impact on the game both on and off the field was immeasurable.”

He was inducted into the Pro Football Hall of Fame as a coach in 2006.

“I have never worked a day in my life. I went from player to coach to a broadcaster and I am the happiest man in the world,” he said at his introduction.

Madden was loved for his lavish broadcasting, and he interrupted his analysis with a “Boom!” or “Wow!” or “Doink!”

Madden also loved using a Telestrator, a video marker that allows one to draw over television images, and helped explain the game to hardcore and casual fans across America.

He gave awards such as the All-Madden Team to hard-working players and turkey legs to the most valuable players from games he helped broadcast on Thanksgiving.

His greatest food gift might have been using his TV pulpit to proclaim his fondness for a dish called turducken — deboned turkey, duck, and chicken with some dressing.

“When I think of an athletic person worthy of the term ‘larger than life,’ I have always thought of John. And I always will,” said Jerry Jones, owner of Dallas Cowboys.

His name is associated with one of the best-selling sports video game series — Madden NFL — which began in 1988 as John Madden Football.

“Today we lost a hero,” gamemaker EA Sports said in a rack. “His knowledge of the game was second only to his love for it and his appreciation for anyone who has ever stepped on the roster.”

Madden’s exuberant and folksy personality also made him popular as a pitchman, promoting Miller Lite, Ace Hardware, and an anti-fungal treatment he memorably described as “Tough actin’ Tinactin.”

According to the Halgreatl of Fame, Madden had a notable collegiate career with Cal Poly, San Louis Obispo, and was drafted by the Philadelphia Eagles in the 21st round of the 1958 NFL Draft. But he never played a down in the NFL after a knee injury in training camp.

Madden first coached at Allan Hancock College in Santa Maria, California, as an assistant in 1960. Two years later, he became head coach, and in 1964 he moved to the state of San Diego, where he served as defensive coordinator for three years.

He joined the Raiders, which were in the American Football League, before the 1967 season as a linebackers coach. In 1969, Al Davis made Madden, just 32, head coach.

The Raiders joined the NFL for the 1970 season when the 10 AFL teams officially folded into the league.

“John Madden was truly the epitome of the NFL and brought the NFL into everyone’s homes the moment it exploded in our consciousness,” CNN sports analyst and USA Today columnist Christine Brennan told CNN’s Jim Acosta.

Brennan said she knew Madden as kind, gentle, smart and “a lovely person.”

During his induction into the Hall of Fame, Madden spoke about his greatest football moment.

“I just want to say that it’s been a great ride,” he said. “I want to thank everyone who came along for part of it.

“Speaking of great rides, I was lucky enough to be carried off the field after we won Super Bowl XI. I was told it took five or six guys to lift me, but then they dropped me. it was me and they were. They’re not going to carry me away. You carry him around for a while, boom! You dump him on the floor. But it was the happiest moment of my life.”

Kevin Dotson of CNN contributed to this report.