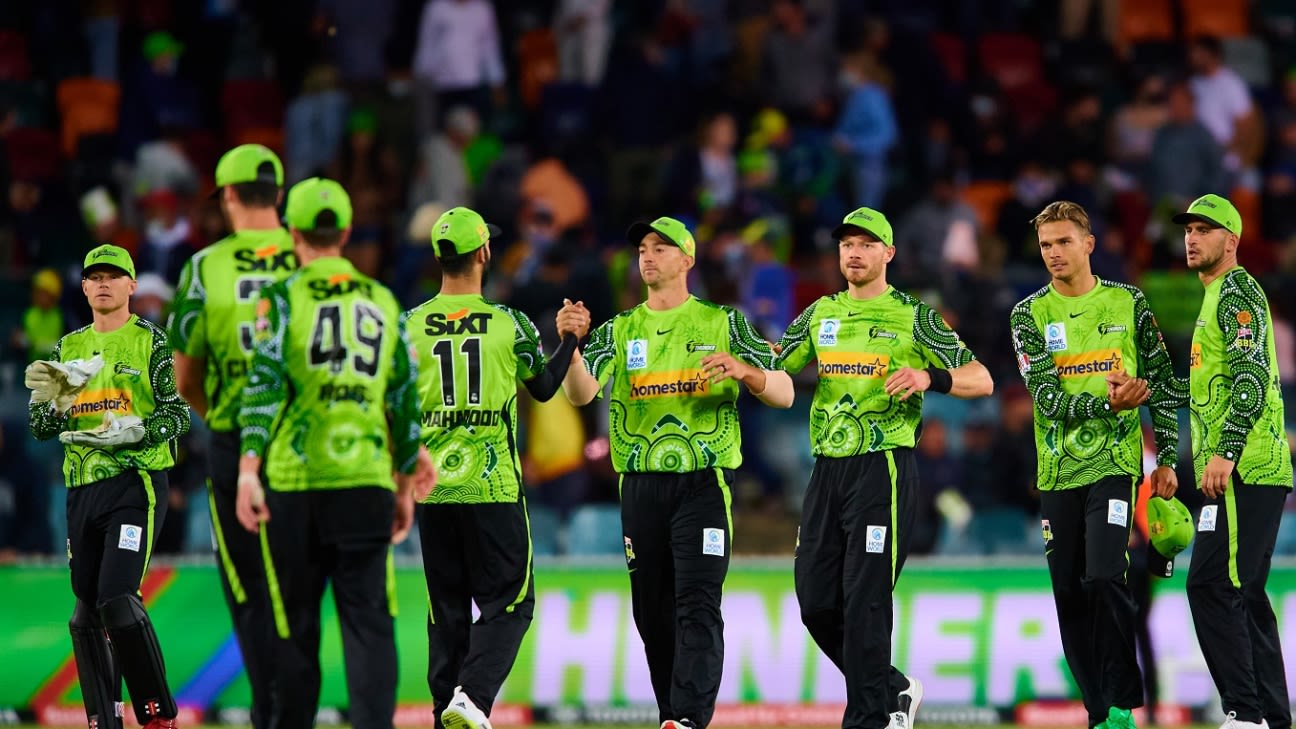 The fifties from Billings and Sangha took the Thunder to 200, and the Scorchers eventually came 34 races below

An impressive Sydney Thunder inflicted the Perth Scorchers’ first defeat of the BBL season with a comfortable 34-run victory over Canberra.

The Thunder proved that the Scorchers were beatable after a dominant all-round performance after creating the victory with a strong 7 for 200 before driving through the league leaders’ strong top order.

There was no heroism this time from red-hot Mitchell Marsh as the Scorchers’ six-game winning streak stopped while the Thunder (3-3) came up with a statement.

The Thunder have not really gotten started this season, partly because the dynamo Alex Hales has struggled, and again he looked out of sorts to fall for just 13. They were in deep trouble with 2 for 23, but English import Sam Billings came in and looked at the goods from getting away – unlike his besieged countrymen earlier in the day at MCG.

He hit a beautiful on-drive boundary first ball and quickly changed the momentum of the game with shots around the wicket. Billings swept spinners with confidence and also liked speedster Lance Morris’ extra pace.

He found a willing ally in Jason Sangha, who continued his strong form as the pair together for a century stood to put an increasingly fragmented Scorchers under pressure. Billings’ exquisite timing meant he didn’t have to do anything rash before trying to accelerate in the surge to fall for a 35-ball 67.

The Thunder never lost momentum with practical cameos down the line and Jason Sangha the focal point throughout. They conjured up the most difficult task this season by dominating the Scorchers’ brilliant attack to post their highest score ever against them and gain standing ovations from the faithful on the terraces.

For the first time this season, after winning the bat-flip, the Scorchers decided to go against their preferred method of hitting first. Maybe the league leaders wanted training chase, or maybe they knew that seven of the last eight games at the Manuka Oval had been won by the team that beat number two.

Regardless of the reasoning, the Scorchers struggled despite fast Matt Kelly’s lead with a menacing late turn to finish with three wickets. With Tymal Mills resting, the returning Kelly took advantage of his opportunity, but the same could not be said of Morris, who made his season debut as an x-factor replacement for spinner Peter Hatzoglou. He struggled to find his highest gear at 150 kmt / 93 mph and bowled only 1.3 overs.

The scorchers were shorthanded when Andrew Tye threw two waist-high full throws in the 15th over and he was not allowed to continue with only bowling 1.3 overs.

It highlighted a sloppy performance from the Scorchers with the ball and in the field – bad habits that seeped over after a dull effort late in the last game against the Melbourne Renegades. Maybe they are tired after being restricted to the road permanently, but the Scorchers clearly did not meet their high standards.

Although they had a strong total, the Thunder knew the job was not done, but the fast Saqib Mahmood and Nathan McAndrew ensured that they did not have to stress with five wickets between them.

Mahmood threw himself out with poison to set the tone while McAndrew toughened the hits, including Marsh’s key wicket. His most impressive forehead, however, was Scorchers captain Ashton Turner, whom he deceived with a perfectly executed slower ball.

Just as the Scorchers were making a brave rally, Mahmood rose to power with Laurie Evans’ wicket when the disciplined Thunder were once again strangled.

With the quick ones performing the heavy lifts, the Thunder did not have to rely on front-line spinner Tanveer Sangha in a performance that should give them true faith in the second half of the season.

Scorchers miss shooting in the hunt

Josh Inglis’ miserable BBL season continued when he was thrown out for a golden duck, but the Scorchers still had hope when Marsh entered the field and he smoked an early limit to emphasize his sublime form.

That did not hold with Marsh, who endured a rare failure when he struck out at 6. Former Kurtis Patterson, who returned after a hamstring injury, and Turner also fell within seven overs.

There was too much left for Colin Munro, who gallantly tried for half a century to revive the Scorchers, but without success despite some late fireworks from an inflated Tye.

Scorchers will lament their poor performance and other teams may sense a plan for how to beat them.