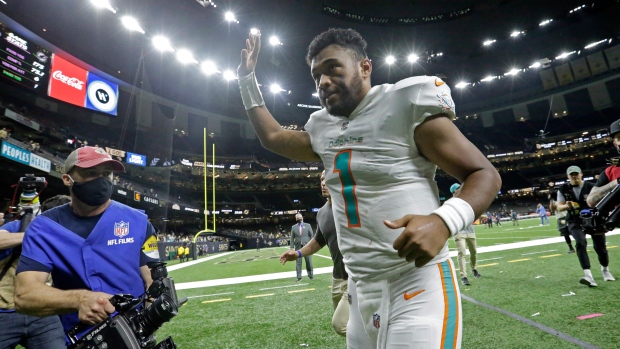 The Miami Dolphins are the first team in NFL history to both win and lose seven games in a row in the same season.

If there is one team to point to in connection with the unpredictability of this NFL season, it is Miami.

The same team that lost games to the Jacksonville Jaguars and Atlanta Falcons in October just beat the New Orleans Saints 20-3 on Monday Night Football to improve to 8-7 with a seventh straight win.

Circumstances matter. For as impressive as the Dolphins have at times looked through their streak, the Saints would have given them a much tougher battle if it were not for the numerous notable absences from their list due to COVID-19.

With 24 teams technically still alive in the playoffs heading into the final two weeks of the regular season, it will be interesting to see how COVID absence affects which teams come in and which teams ultimately falls short.

From a betting perspective, it will be fundamental for a strong finish to stay on top of who is in and who is out.

The Dolphins won and covered easily as the three-point favorite in New Orleans.

The total figure remained below the already low figure of 37.5.

To me, it felt like an opportunity I let slip.

While focusing on the players available for both teams, I did not put enough stock into who was not available, which resulted in missing out on an opportunity to really make money betting Miami – 3.

Last 8 sacks games for @MiamiDolphins was September 30, 2012 against Arizona.

Meanwhile, Jaylen Waddle caught 10 of Tua Tagovailoa’s 19 passes to match the NFL record for most of a rookie in Monday Night Football’s history.

It could have been a closer match if it were not for all the remarkable absences the Saints had to deal with.

The Saints enter tonight’s match against the Dolphins with 22 players on the reserve / COVID list…. pic.twitter.com/8ym6RN7kai

Under the circumstances, it really was an opportunity to hammer Miami and under, and I wish I had.

Overall, the NFL favorites went 10-4 straight up and 8-6 against the spread in Week 16 with a couple of games closing as a pick’em.

Looking forward to week 17, I will be following closely to see if there is another opportunity like the one I missed on Monday night.

Sean Payton: “Impossible” to evaluate the game by the Ian Book off Dolphins game. https://t.co/luxkjVzl2T

As mentioned, with 24 teams still in the playoff mix, there are some exciting matchups to look forward to his upcoming week.

But if COVID absences and injuries continue to take their toll, it could open the door to jump on some key figures in Week 17.

The NHL is set to resume tonight

The NHL season resumes tonight with three games on the program, including the Montreal Canadiens visiting the Tampa Bay Lightning in a rematch of last year’s Stanley Cup final.

The Habs have been a shadow of the team that went to the finals last season. Montreal’s 0.274 point percentage is currently the second lowest in franchise history.

Meanwhile, Tampa Bay has won eight of its last nine games overall and leads the NHL by 44 points.

Lightning could also get a much-needed boost with Brayden Point set to return.

Brayden Point could return to the Tampa Bay Lightning against the Montreal Canadiens on Tuesday. More in NHL Buzz. https://t.co/yyZVmNrWz6 via @NHLdotcom

Both teams will be missing more players due to COVID-19.

As of this morning, Lightning is an overwhelming money line favorite with -295.

The San Jose Sharks are -215 for tonight’s date with the Arizona Coyotes.

The Vegas Golden Knights are a -145 road favorite against the Los Angeles Kings.

As is the case with the NFL, monitoring who is in and who is out closer to playing time will be as important as ever when it comes to handicapping NHL games during this unprecedented period.

Day 2 of the World Juniors gave us the first disruption of the tournament as Germany beat the Czech Republic 2-1 in overtime as a +295 money line underdog.

WJC favorites are now 7-1 on their way into Tuesday’s matches.

It is #WorldJuniors GAME DAY on #TSN!

The last three games of the day all remained below the total on Monday as the unders improved to 6-2 at the tournament.