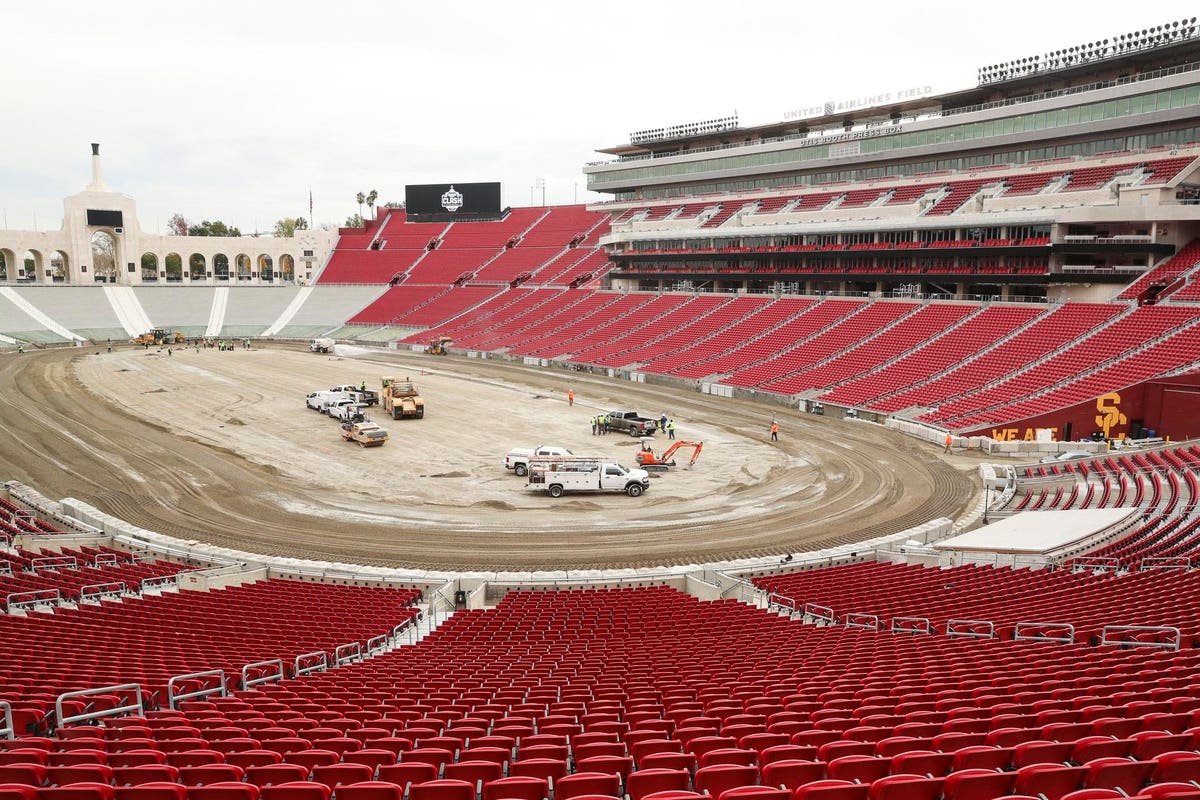 Just a few days before Christmas, NASCAR held a groundbreaking ceremony in Los Angeles. Specifically in a location on Figueroa Street in the heart of downtown. The LA Memorial Coliseum opened in 1923 to honor the area’s WWI veterans. NASCAR will hold an exhibition race at the legendary venue in February, a race that has no championship implications, only glory to whoever wins it.

It’s a bold move to be sure. The “Clash” has opened the NASCAR season every year since 1979. It gives fans and competitors a first look at what the coming season has in store with select drivers competing in formats that have changed over the years. Held at Daytona International Speedway every season since its inception, the Clash normally takes place a week prior to the first championship points-paying race, the Daytona 500 season opening.

However, nothing has been “normal” for NASCAR in recent years.

From reviving a sport that is losing popularity, to navigating the Covid-19 pandemic, NASCAR has moved races, ditched traditional schedules, gone back to dirt, and shown it isn’t afraid to try something new. Even the Clash itself underwent changes when the race was first moved from Daytona’s oval to the road course last season.

Still, the September announcement came as a surprise that the Clash would be moving to LA and being held in the aging Coliseum. It is a bold move that is not without risk. NASCAR VP Marketing Services Patrick Rogers confirmed to Sports Business Daily that NASCAR will spend $1 million to convert the Colosseum field into a quarter-mile paved oval. This is to hold a race that has never been run anywhere outside the boundaries of Daytona International Superspeedway, and in a market already filled with numerous professional sports; in a month (February) in Los Angeles with the coolest temperatures of the year and the most rainy days on average. The race also marks the competitive debut of NASCAR’s much-discussed Next Gen car, which has been delayed for a year due to the pandemic.

All those factors make the $1 million investment a bit of a gamble. However, it is a gamble that NASCAR is willing to make that seems like a pretty safe bet.

Of course, February usually brings the coolest temperatures of the year to the area, but maximum temperatures still average a very comfortable 70 degrees; and although the month has the most rainy days, that number of days averages five, out of 28 days in the month. And the LA area already has a built-in NASCAR fan base. The sport features a race at Auto Club Speedway in Fontana, just 50 miles away, which in LA is like across the street. While that race will be held three weeks after the Clash and a week away from the Daytona 500, the Clash will be unlike any of those races and should give Southern California fans motivation to attend. It will also give those fans a taste of what the future will bring; plans are in development to reconfigure Auto Club Speedway from a 2-mile superspeedway to a half-mile short track, and the Clash could give fans a personal example of what short track racing looks like.

In NASCAR money, $1 million is not a big expense. For example, to add dirt to the surface of Bristol Motor Speedway for the race on that half-mile track last season, Speedway Motorsports CEO Marcus Smith said it cost them $2 million. Few would argue that the investment there has not paid off well for the industry.

The Colosseum has a capacity for more than 93,000 fans, and if NASCAR sells out the race, they will easily recoup that investment. Not to mention the TV coverage the first event of its kind brings. With the LA skyline and the famous Hollywood sign in the background, the images alone should be stunning; add an experience new to the sport and no doubt the highlights will be showcased for years to come; it’s a televised event where advertisers too should be more than willing to pay a lot of money to be a part of those images and that new experience.

Covid-19 could still be a factor as the omicron variant is still spreading around the world. But some scientists speculate that the mild variety will soon peak and lose weight quickly. And with the outdoor location there should be less worries about transmission.

It is not the first time a paved road has been built near the Colosseum. The Stadium Super Trucks series used asphalt on part of the infield for a 2013 event. NASCAR’s schedule included iRacing simulations that seem to prove the racing will be intense. And the Next Gen car has been extensively tested and will be further tested before February. In another first, all drivers and teams will qualify for the Clash instead of a field that is normally about half the size of a normal race. And those drivers seem poised to take to the track in the new cars in anger and the Clash, with no impact on the season’s championship, should be a perfect time to do just that. In fact, the drivers look forward to it.

“It’s going to be great for all of our partners, whether it’s for the race car or even the personal side, to just be able to go into that market… it’s a market that we’re not necessarily into that much, so in being able to go downtown LA and race in that area will be great for everyone involved.”

At the end of the day, $1 million is a lot of money, and while there are no sure bets (that’s why they call it gambling after all), NASCAR’s investment for the Clash seems like a safe bet, and one that should pay dividends for quite some time. .