I think I fell into the ‘toot trap’ again. I see a platform game with an interesting art style and a spunky redhead demon, and I’m fascinated. Demon Turf tick many of my boxes, at least in concept. Unfortunately, the concept only takes you so far. 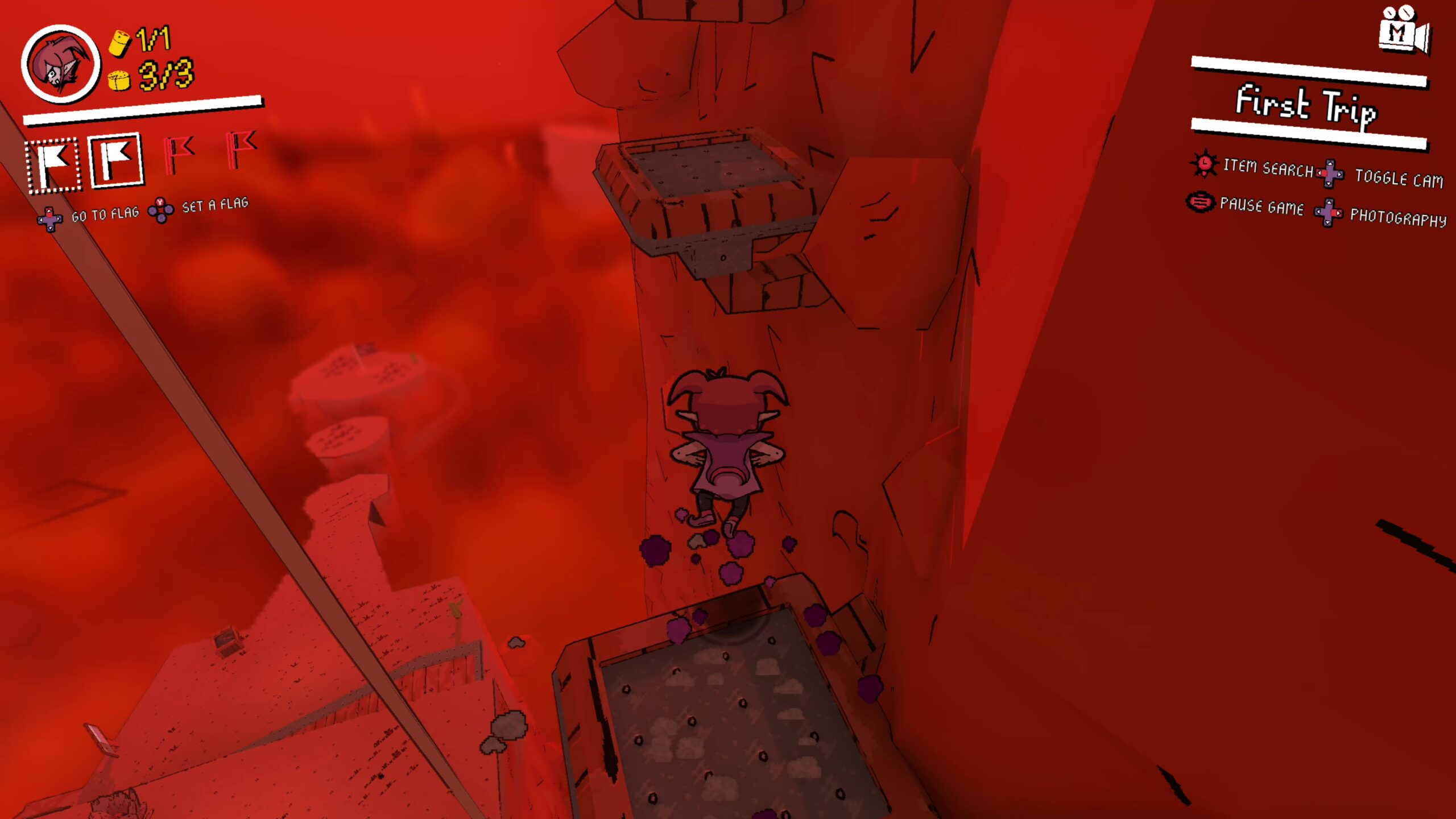 Demon Turf is about a young (by demon standards) girl who one day gets tired of the Demon King appearing in her dreams and decides to depose him. It’s a pretty easy plot, but I do not remember the last platform game that grabbed me with its narrative.

Of course, you need MacGuffins to unlock the bad guy’s front door, and in this case, it’s 50 batteries. To get the batteries, Beebz has to dethron the four local gangs. You probably know the dance steps if you’ve ever played a platformer. You go from level to level and plunder them for their collectibles. Each hub world then ends with a boss fight.

What sets Demon Turf apart from your usual platforms is nothing. Well, maybe nothing. The art style is quite striking. It combines 2D characters with 3D levels, not unlike the recently released Here comes Niko. The 2D characters can be a hit and miss. Many of the random NPCs that dot the levels are pretty generic, but some of the enemies are funny and cute. It really is the combination of the two styles that gives it a unique look.

Other than that, nothing about Demon Turf surprised me. Each world gives you a new power just before the boss fight. This includes a grab hook, the ability to turn into a wheel, one that lets you slide, and the latter slows down time in a particular bubble. The goal of a level is to grab the battery eventually, but you can also grab cakes to spend on mods to your abilities.

When you defeat an area boss, the levels change to a different, more challenging configuration. This allows you to grab another battery and candy that buys cosmetic changes. However, do not think that this is optional – you will need the bulk of the batteries to unlock the final boss. 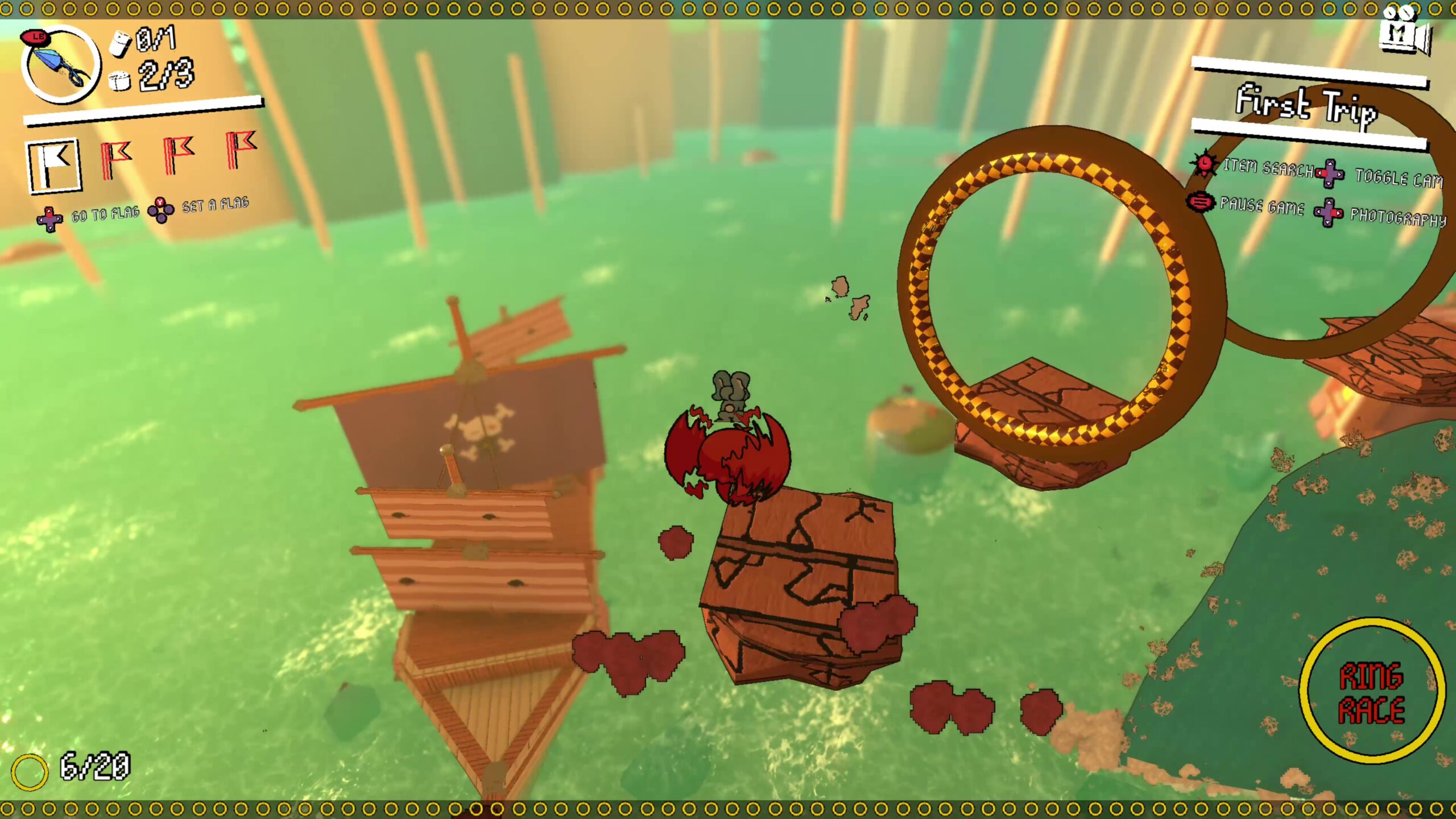 Hold on then, I remember one thing Demon Turf makes that I have not seen in a platformer before: you set your own checkpoints. Many of the levels are extremely vertical, and dying or falling to the bottom can be extremely annoying. Instead of just mixing respawn points, you set your own. You may see this as a valued feature, or it may just annoy you. Like when you start a new level and temporarily forget the feature until you screw up for the first time, forcing you to repeat that whole section again. You also get three flags to plant (you can buy a fourth), which means you have to predict how far the level is and where it is best to place the checkpoints.

So on one side you can place a flag before a dangerous looking section. On the other hand, if you use all your flags too soon, then this is the TS for you. I have personally only had a few times where this happened. More often than not, I tended to just forget that it existed until I found myself repeating the same section again. 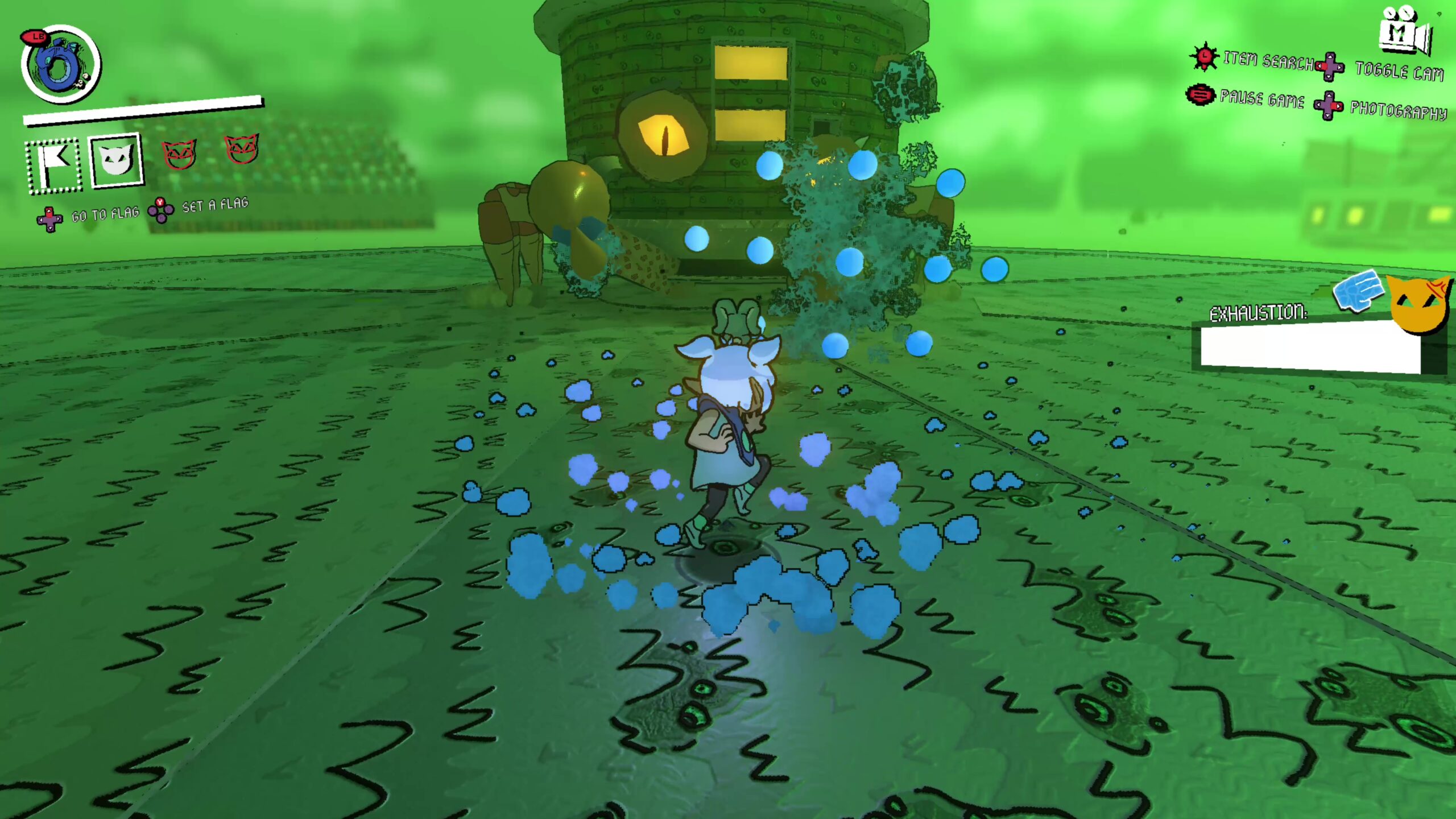 No platform character is complete without a stockpile of different jumps. It is fine; one for each weather type. However, the way they work together can be a bit of a puzzle. For example, you can jump, double jump and slide. Or you can jump, glide and long jump. Completely different distances depending on the order in which you perform them. You can also not wall jump if you double jump or slide first, which was a bee in my bonnet throughout the run.

What really bothers me, though, is how unreliable Demon Turf is with its difficulty curve and readability, which sometimes go hand in hand. Take the other boss for example. I fell half an hour on the jerk because I could not understand what the game wanted of me. Stun him, touch his butt, knock him out of the side of the arena. Except most of the time, he just wanted to start flying back to the middle of the arena. Other times he fell as he should and I never found out what I was doing differently.

It is consistent throughout the game. There are levels that are more open and invite you to complete challenges to unlock doors. But sometimes when you complete a challenge, it will show you a doorway but give you no guidance on where that door actually is. It can lead to a lot of walking around trying to find what you triggered, and while this is not a complete showstopper, it is an unnecessary annoyance.

Likewise, Demon Turf is sometimes really picky about how to fill in certain areas. The difference in your jumps may seem small, but sometimes the game will really have you jumping, slipping, jumping and not accepting a jump, double-hop-gliding instead. Other times, it really seems like a double jump can get you up on a ledge, but no, it will have you jumping, wall jumping, double jumping, sliding. Just do not do it in disarray, otherwise you will not reach it.

I hope you remembered to put a checkpoint down. 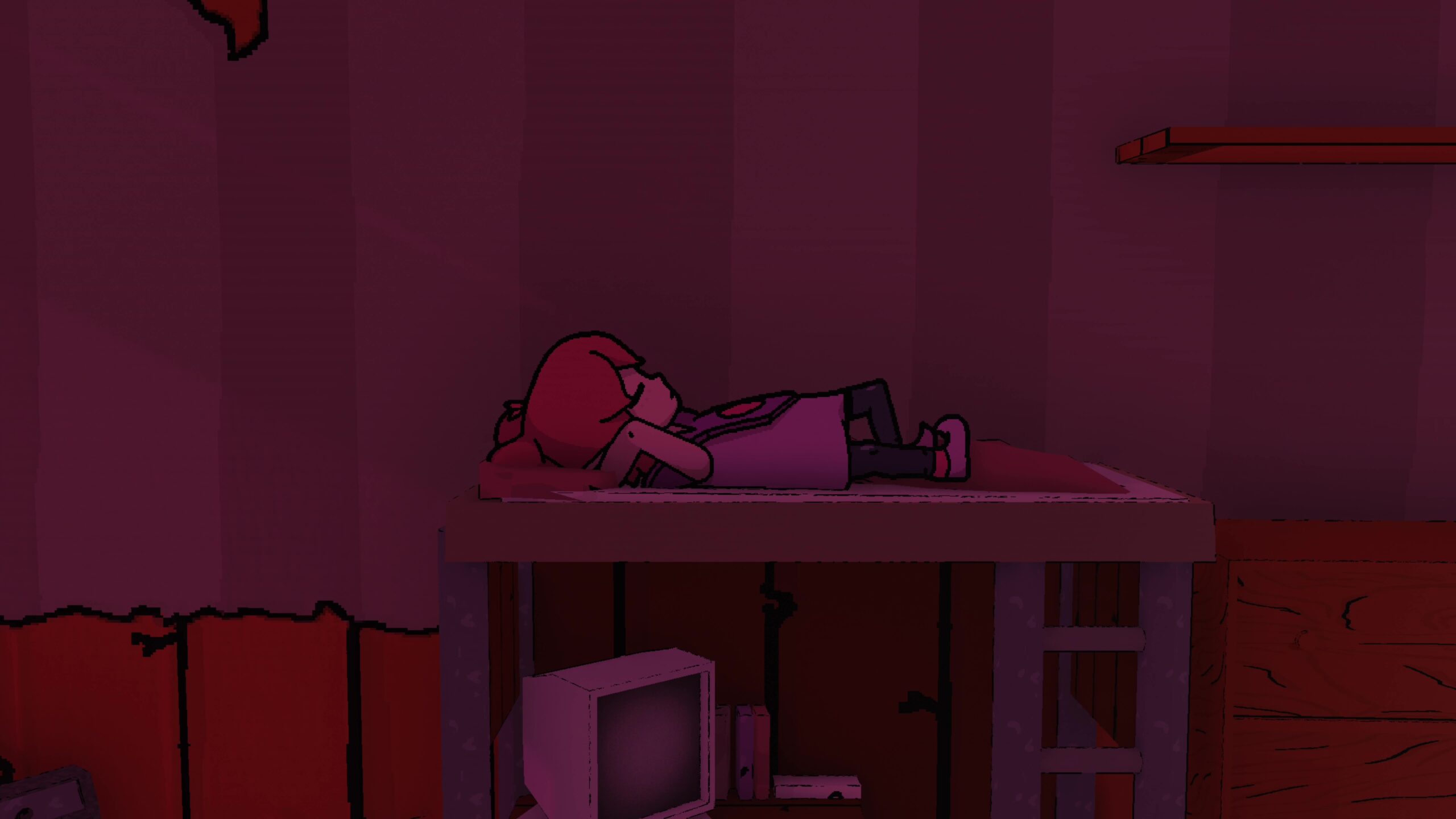 Demon Turf has the dual spirit that it is not so unique or well executed. It might get a pass if it was one of them, but every time I thought I was starting to get into its flow, something would come up that frustrated me. It made it a difficult battle to get through. There was nothing that gripped me. The characters, the gameplay, the music; it’s all just so overwhelming.

What made this more annoying is its love for associated collectibles. Do you want to take all the pictures, collect all the cartridges, get all the candy and cakes? How about spending time in the arena or the football mini-game? You will not be rewarded very well for completing these, so they are there almost for their own sake. Extra fluff. And that’s fine, I’m just not getting close enough to like it Demon Turf to disturb.

It’s not a soulless game or one without a spark – there’s definitely a lot of love in the final product. It just seriously needed a few more sets of eyes on it to bring out its flaws. Many of the things that annoyed me the most could be solved with a few more laps with the floor buffer. But here we are, and Demon Turf does not seem to me to be a territory worth conquering.

[This review is based on a retail build of the game provided by the publisher.]