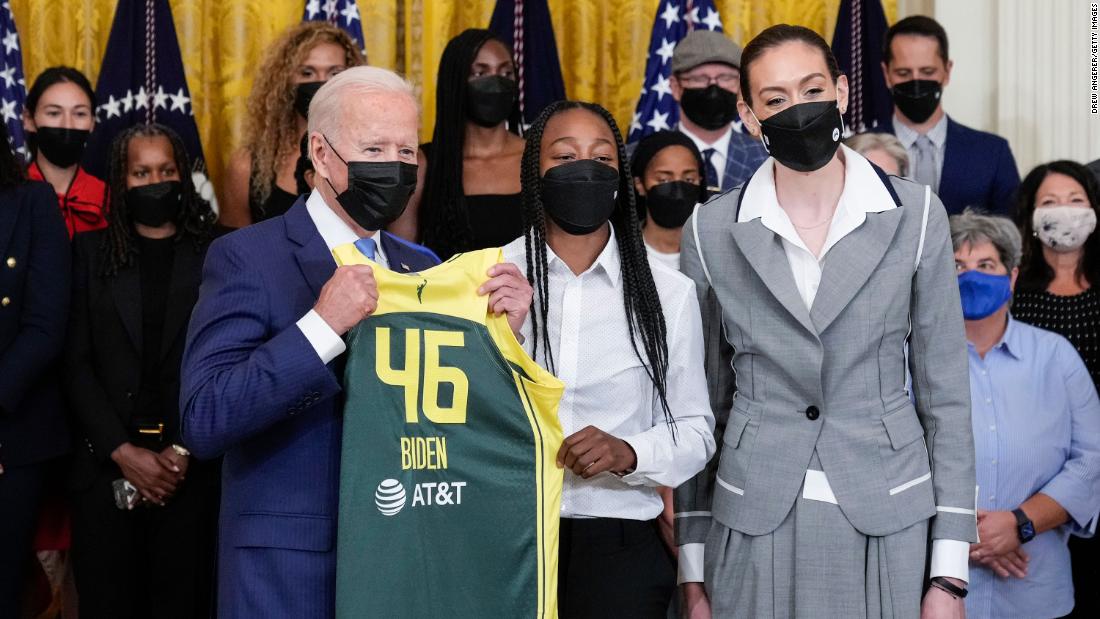 Share
“What makes this team remarkable is that not only do they win games, they also change lives. Encouraging people to get vaccinated so we can beat this pandemic, by speaking out and standing up for racial justice and voting rights, education support and… mentorship programs for youth and struggle to protect trans youth from an epidemic of violence and discrimination,” Biden said.

“That’s what winners do. They shine the light, they lift people up, they’re a force for change. That’s the Seattle Storm, that’s the WNBA, that’s what they do,” he added.

The Storm became the first women’s professional sports team to visit the White House during the Biden administration, a remarkable thing in itself given that no WNBA team has visited the White House since 2016, President Barack Obama’s last year in office.

“As people who are part of women’s sport, it feels good to be back here and celebrate our achievements in this way,” said Storm star Sue Bird.

Bird, who is married to soccer star Megan Rapinoe, said she wouldn’t truly represent the league if she didn’t talk about “the work that remains to be done in our country and our communities.” Rapinoe also visited the White House earlier this year to mark Equal Pay Day, something Biden said should have happened much earlier during Monday’s remarks.

The president praised the WNBA as a whole for giving courage to millions of women and girls to show them that women can do everything a man can, noting that his Vice President Kamala Harris was an example of that truth.

Storm owner Ginny Gilder said that despite playing their season in a bubble isolated from much of the world, WNBA players were fueled by the social justice movement that swept across the country last year.

“The women of the W have been at the center of this movement. They are using their play on the field and their eloquence not only to demand change, but to generate engagement and effect change,” she said.

“Through their focused efforts, these leaders have modeled how to respond to difficult times and never settle. They offered concrete reasons to hold onto hope, and they are changing the future of our country,” Gilder added.

WNBA players were vocal in their opposition to the former Georgia Senate. Kelly Loeffler, a Republican who co-owned the Atlanta Dream franchise, and Gilder said the efforts of WNBA players helped change the balance of power in the United States Senate thanks to Democrats winning the two Senate seats in Georgia.

Former Storm player Crystal Langhorne, who currently serves as the director of community engagement for his social justice platform Force4Change, said the team must and will continue to reinforce injustice.

“Social justice must not fade into the background. We must continue to strengthen, invest and do what we can to be a force for change,” she said, saying it is an honor to visit the White House during a reign that aligns with so many of the team’s values.

“That’s why we as a nation must support women’s sport, not just during the Olympics, but throughout the year, during every season, by appearing in person or on TV,” he said. “These women are great athletes. They are the best in the world. We honor them by standing up for them.”

Biden also made a special shout out to the five Storm Olympians, including three who led the US team to the gold medal: Breanna Stewart, Jewell Loyd and Bird – who presented Biden with a Storm jersey.

Share
politicsSeattle Storm: Biden commends WNBA champions for their work on and off the field during White House visit - CNNPolitics