Maybe it grows on you

I’ve spent a decent portion of the year playing “healthy” games. I put it in quotes, not because I’m sarcastic about it, but because the movement is pretty foggy. It’s hard to say what really counts as healthy, but in general, if you are not experiencing terror or shooting down corridors full of guys, you are over the limit in terms of health.

I believe in the movement. Not because I hate violence in video games, I just think it’s too prevalent. More options are needed. Conflict resolution should not just escalate into a gun battle right away.

However, I have been very disappointed with most of the healthy games I have played this year. It’s not because I feel they need to be healthy, they just often end up being not much else. Grow: Song of the Evertree is a welcome respite from it; a game that succeeds in showing that you can make a compelling experience without violence. 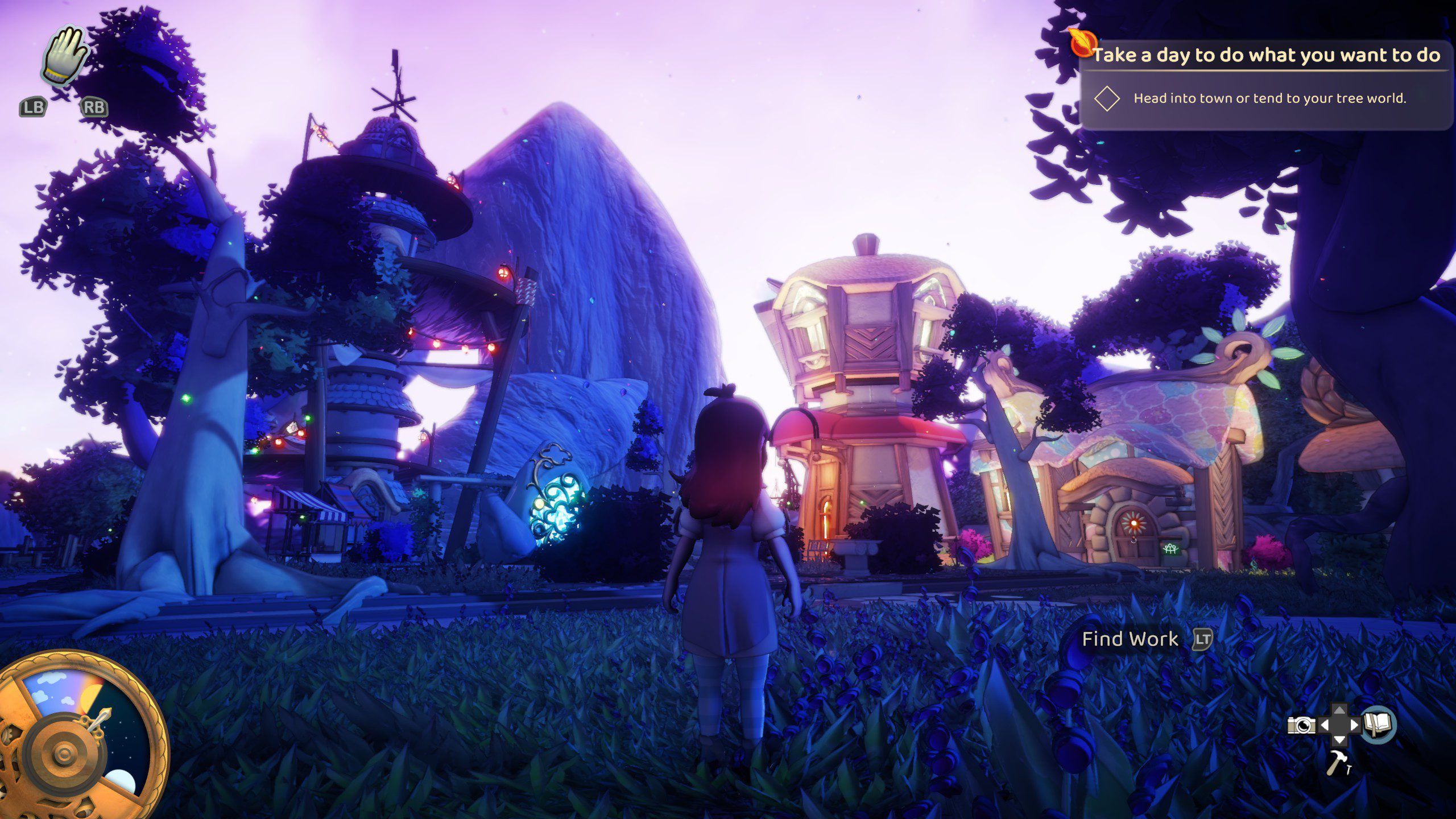 The story involves a life-giving tree that for a long time had provided harmony to the inhabitants at its roots through the “song”. One day the song “broke” and people could no longer hear it. Soon the tree was flooded by the wither, and all fled except one young alchemist, who now sets out to restore Evertree to its former glory.

Grow: Song of the Evertree is a multifaceted game. To break it down, there is gardening, urban building and exploration. You plant seeds to build worlds that you cultivate, and that gives you resources. You then use these resources to build regions in a city and attract villagers. To make progress, then find a fragment of the song, return it to Evertree’s heart chamber, so if your townspeople are happy enough, you can push it withering back and expand your city.

If it sounds repetitive, it’s because it’s. This is offset by the fact that there is so much to do. You will often zoom out to your worlds in the branches and see the same planting / watering / hammering animation ad absurdum, but there is nothing that forces you to do it every day. You do not have to develop a routine that you can go out and stick in the little project you are working on.

It is the fact that there is so much interplay when it comes to progression that it takes a long time to get old. Maybe you want to spend the day maximizing a city’s potential. Maybe you’d rather run quests to try and make your townspeople as happy as possible. There are even goals you can achieve to achieve various rewards. Much of the game is so satisfying, and Grow: Song of the Evertree is strangely well-balanced for a game with so many individual mechanics.

The city building, for example, is very adaptable. Not only do you have a lot of control over its layout, almost anything can be decorated with different paints and signs. You can even slap mustache on all your city people, I do not want to stop you, nor is it Grow: Song of the Evertree. 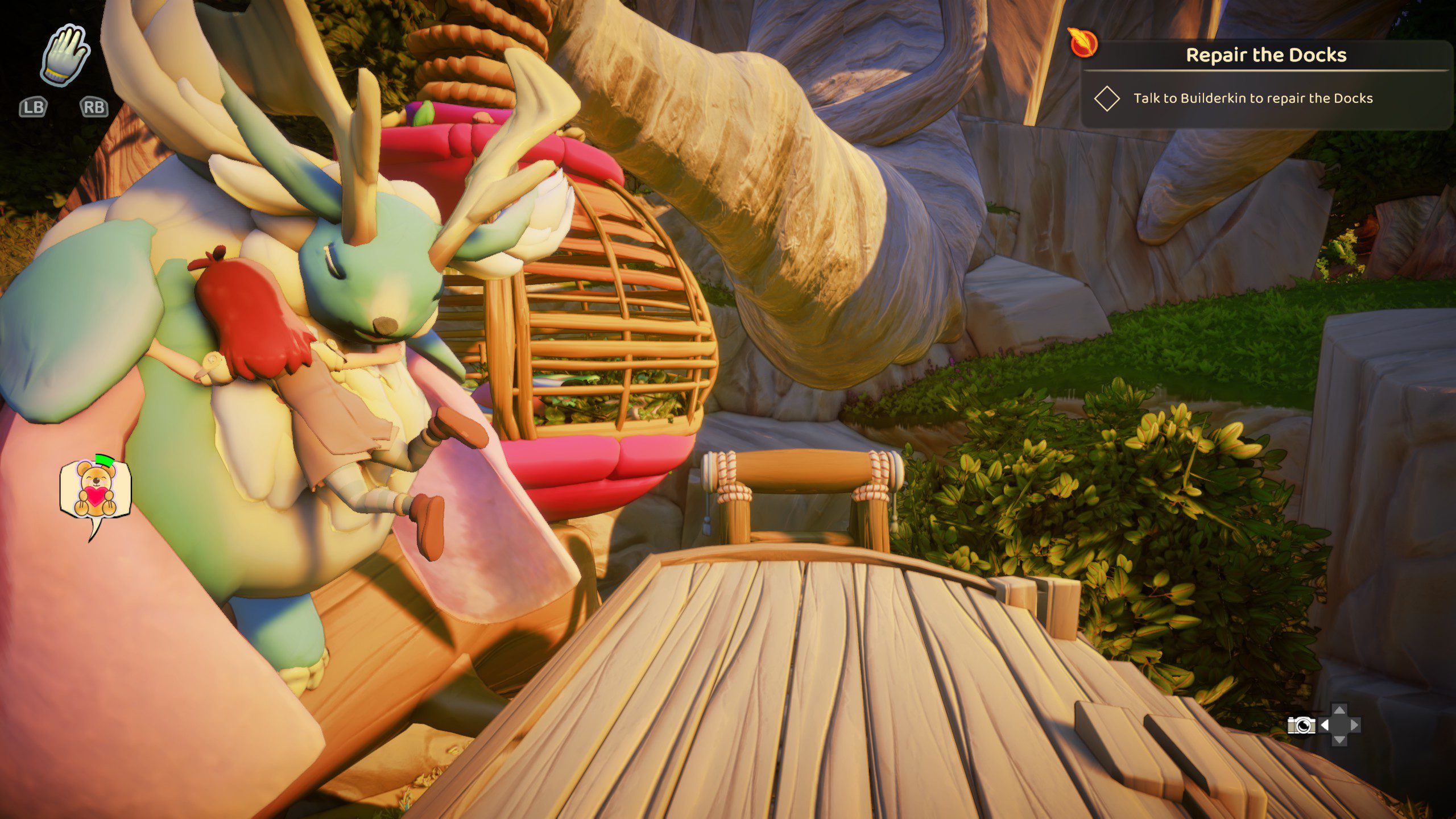 The gardens you build in Evertree’s branches are also something special. You create seeds by mixing different alchemical elements, and the world is created based on that combination. At first I just got some generic but colorful forests, but then I started getting weird things like a world that had moving eyeballs everywhere. The number of possible combinations is insane, and I wonder what’s hiding in that algorithm.

The exploration is no slouch either. Each area of ​​the city you uncover has a short dungeon that may be less ambitious than your typical one The wild spirit dungeon, but is at least comparable. Each has its own puzzles and themes, and while the design can be confusing at times, it ties in well with the rest of the game.

All this is done under a sunny aesthetic. There are many hugs to be done. You can adopt creatures from your worlds, and gaining their trust happens through belly rubbing and chin scratching. You can also take selfies with the animals, which does not give you much besides a warm feeling inside.

There is some struggle if you want to become technical. There is clatter that sometimes roams around that you have to hit with your hammer. However, they do not attack you and hitting them just causes them to dissolve and release an insect trapped in their goo. 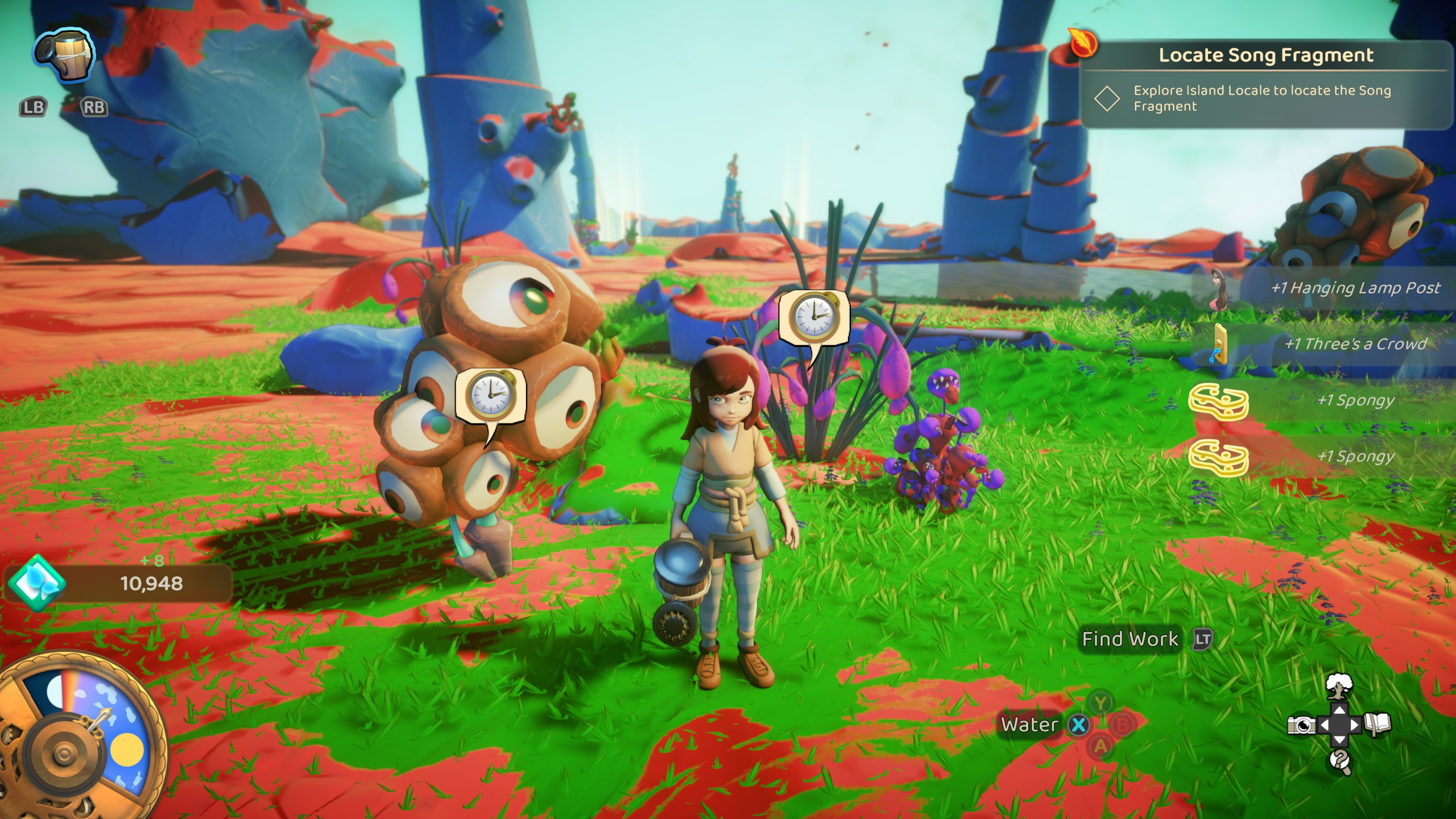 Grow: Song of the Evertree is definitely punching outside of its weight class. There is a lot of content, and although most of it is extremely solid, there are some rough edges, but they do not significantly detract from the overall experience.

However, you will definitely see them. While the game’s art style pops up with vibrant colors, the animation is a bit harsh. There is plenty of clipping and many awkward moments. If you jump from a high place, your character opens an umbrella to prevent getting hurt. But if they do this while carrying an object, the umbrella just slips out of their hand and hangs in front of them in a way that would be completely inappropriate.

There’s this romantic mechanic in the game, but I do not know why. You can technically build relationships with all characters, but there were a few that appeared as frequent quests until they admitted their attraction to my amazing self. It may be sweet, but it’s a little undercooked. It just happens a little out of your control, and it doesn’t really lead to much other than a rather banal subplot.

For that matter, the only characters with any real depth are Copperpot and Book, your two alchemy companions and tools. Dialogue is often quite entertaining, even with casual villagers, but I never felt like getting to know any of them. It may be out of reach, and the overall plot is an optimistic environmental message, but I think I would feel more drawn into the world if there were people living in it to connect with. 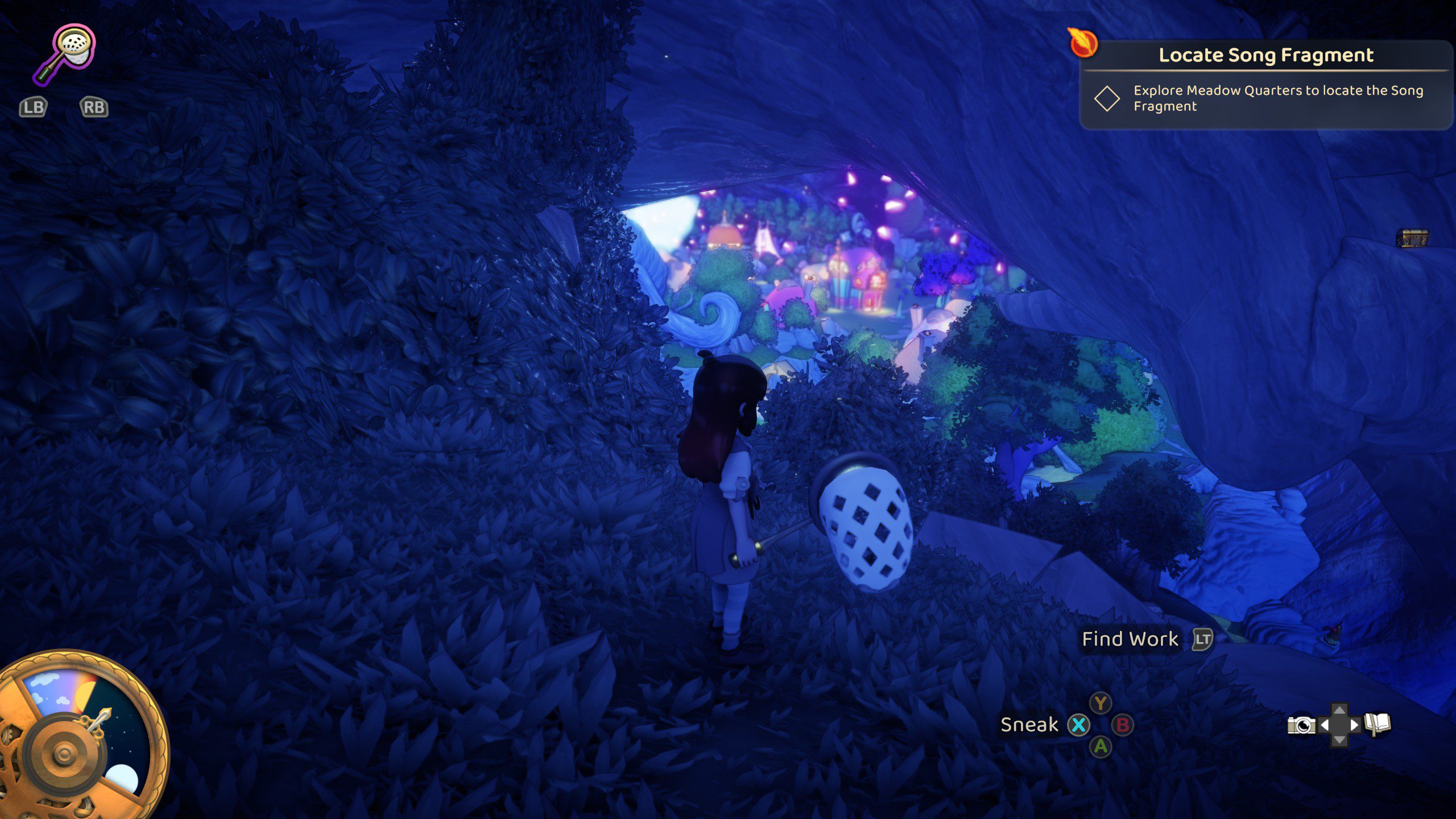 I feel Grow: Song of the Evertree is the kind of game that is great to download in small quantities. Something Crossing animals but without time limit. Every time I did, I would be sucked in for a few hours, and then put it aside, but I enjoyed it all the way through.

There are some rough edges to be found and one person’s relaxation will be another’s repetition. However, Grow: Song of the Evertree succeeds in its attempts to present a healthy, laid-back experience. Its successes are admirable and its missteps are insignificant. It lives up to its philosophy and presents something that has the whole satisfying progression of a typical gaming experience, but without all the violence. There is still room to grow, but the roots are firmly planted.

[This review is based on a retail build of the game provided by the publisher.]