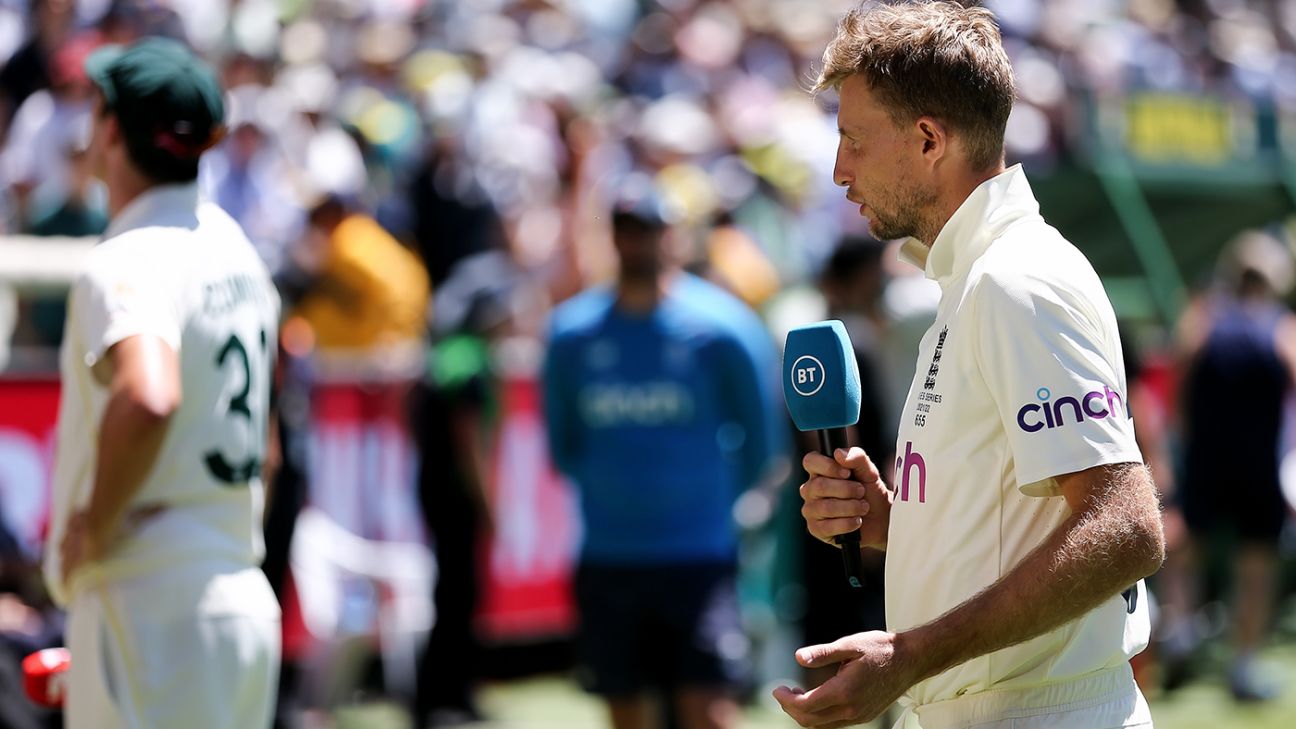 As anyone who went through the credit crunch of 2008 will remember, economies are fundamentally built on trust. As long as the public trusts the robustness of the institutions tasked with managing their assets, these assets need hardly exist beyond a few 0s and 1s in a digital mainframe for them to be real and lasting indicators of a nation’s wealth.

When doubt begins to plague the system, however, it is incredible how quickly the rot can take hold. Is this really a Triple-A-rated bond I hold in my hands, or is it actually a tranche of sub-prime loans that are barely suitable to cover the gerbil cage?

Likewise, is this really the world’s most enduring expression of sporting rivalry taking place in Australia right now, or is it a meaningless turkey footage that exists only to justify the exorbitant sums that the TV stations are willing to cough up for the privilege to host it … a privilege that in itself feeds into the very same creation myth that causes the hype to hype and the bubble to burst constantly.

On Tuesday, that bubble finally burst. After weeks of barely suppressed behind-the-scenes panic, England’s capitulation in Melbourne deserves to be the test cricket’s very own Lehman Brothers moment – the final, complete frontal collapse of an institution so old and formerly presumed to be as inviolable as it may require. unprecedented emergency measures to prevent the whole sport from going up in the air.

For there really has never been an Ashes campaign quite as pathetic as this one. Crushing defeats have been abundant in the sport’s long history – especially in recent times, when England have now lost 18 of their last 23 tests Down Under, including 12 of the last 13. But never before has an English team taken the field in Australia with so little hope, so few expectations, so few remaining skills to maintain control over their own destiny.

Nothing expressed the gap better than the performance of Australia’s player of the match, Scott Boland. Disregarding the rightful celebration of his original legacy, his international furnace readiness at the age of 32 was of far greater importance after a lifetime of wear and tear for Victoria in the Sheffield Shield. Like Michael Neser, 31, making his Adelaide debut last week and a Test wicket-taker with his second ball in the format, Boland arrived on stage just as ready for battle as England’s Test players used to be – especially the unit that won. Ashes in Australia in 2010-11, which included four players with a century on their debut (Alastair Cook, Andrew Strauss, Jonathan Trott and Matt Prior) and two more (Kevin Pietersen and Ian Bell) in their fifties.

The contrast to England’s current crop of figures could not be more annoying. It’s really impossible to see how Haseeb Hameed could be expected to offer more than his number on seven runs from 41 balls across two innings at MCG, while Ollie Pope’s Bradman-like average of 99.94 on his home court at The Oval compared with to his cat-on-hot-look-roof screens in Brisbane and Adelaide, is the most visceral proof of a domestic first-class system that fails the next generation.

Even on the second day at MCG, England’s best day in the series ended with four down for 31, still 51 runs behind, as Australia’s fast punished their opponents for a fleeting moment of hubris in the middle of the afternoon by triggering an hour of hubris. God-complex thunderbolt. It was fair that the morning follow-up would be just as quick and relentless.

Seeing a bent and beaten bunch of English cricketers soak up Australian outfield parties is obviously nothing new. But this is different from previous Ashes hammers, because despite the Covid restrictions and the limited preparation time, a series loss has never before felt further away from the kind of reservations that previously supported such debacle Down Under – especially 2006-07 and 2013 – 14 whitewashes, both of which were at least the bloody divisions of English teams that had previously swept everyone in front of them.

The 2021-22 team, on the other hand, has not swept anything before that, except for a few unpleasant home truths under a series of blankets. Despite James Anderson’s enduring grandeur – whose undefeated defiance evokes Curtly Ambrose and Courtney Walsh’s noble maintenance of the crumbling standards of the West Indies at the turn of the millennium – and despite Joe Root himself being willing to produce a year with such a damned luster as it deserves being preoccupied with Greek mythology, the rabble that clings to their coat tails is little more than the zombified remnants of the side that surrendered the urn so vaguely back in 2017-18.
They traveled to Australia with the same captain, for the first time on an Ashes tour in more than 100 years (and Root is destined for the same 5-0 shellacking that JWHT Douglas achieved in 1920-21); the same core-bowling unit of right-arm medium-pacers, and on this third test, the same out-competing middle-order, with Root, Dawid Malan and Jonny Bairstow on this occasion physically united with Ben Stokes, compared to the ghost at the party who had haunted the team’s efforts four years ago.

Nothing in the meantime has been made for this generation of players, despite a huge amount of hot air about how exhaustive the planning of this campaign has been – especially from England’s dead-end head coach, Chris Silverwood, whose epitaph deserves to be the same fateful phrase he used to announce England’s Test team to face New Zealand in early summer.

“The summer of Test cricket will be fascinating,” Silverwood wrote back in May, shortly after taking over from Ed Smith to become the most powerful supremo in the team’s history. “Playing the two best teams in the world, in New Zealand and India, is a perfect preparation for us as we continue to improve and develop towards an Ashes series in Australia at the end of the year.” Well, it ages well, right?

And yet Silverwood is just another symptom of the wider malaise of English cricket. From the start, and regardless of his theoretical influence, he was merely an uninspiring over-promotion from the team’s existing ranks – more than anything else, a recognition of how undesirable the role of England’s head coach has become in recent years.

“All attempts to keep English test cricket viable stopped essentially from the moment Tom Harrison was appointed the ECB’s CEO in 2015.”

In an era of gig-economic opportunities on the T20 franchise circuit – where hardly a day goes by without Andy Flower, the architect of England’s last really big test team, being announced as the Tashkent Tigers’ batting consultant in the Uzbekistan Premier League – who will or needs the commitment of 300 hotel nights a year required to oversee a site that, like an overworked group of stadium-rock dinosaurs, fears that the moment it takes a break from endless touring, everyone will Forget that they ever existed in the first place?

English cricket’s financial dependence on its test team has held the sport in this country back for generations, long before the complications of Covid started to make the team’s relentless touring lifestyle even less tasty than ever before. That was a point that Tom Harrison, the ECB’s CEO, acknowledged in a moment of guard-down openness before last summer’s series against India – and a point he will now have to revisit in earnest as the sport throws itself. into a new crisis of self-confidence, but one that is actually the reverse of the same coin that the sport has turned all year round. English cricket’s ongoing racism crisis is, after all, another judgmental expression of the sport’s inability to keep up with the times.

“It’s the most important series, so we have another ‘most important series’ on the way, and then another one right after that,” Harrison said of the India campaign – which, so we do not forget, will also end next summer for the game. financial advantage, although the players before would go on and forget. “The reality is, for international players, the conveyor belt just keeps going. You want players to show up in these ‘most important series’ and feel great about the opportunity to play for their country. They will not be able to reach if they’ve forgotten the reasons why they’re playing. “

The problem with Harrison’s enduring credibility, however, is that all attempts to keep English test cricket viable essentially stalled from the moment he was appointed CEO in 2015.

That summer’s team still had the latent talent to seal the last of their four Ashes victories in five campaigns, but on Harrison’s watch, the ECB has essentially spent the last six years preparing the life rafts for the sport’s post-international future – especially through the establishment of The Hundred, but also through the full focus on winning the World Cup in 2019, precisely because it was the kind of board-friendly “leverable” that sits well on a list of board-room KPIs … as opposed to the shabby , intangible mesh of contexts by which success in test cricket must always be measured.

It was a point that Root alluded to in his shocking comments after the match, in which he hinted that the game of red balls needed a “reset” to match the remarkable progress of the white ball from the wreck of the Winter World Cup. But what does England honestly think can be reset from this time of the sport’s breakdown?

It feels like we have all been complicit in the long condom here. For more than 16 years, Ashes has been sold as the most glorious expression of cricket’s noble traditions, while the very biennial obsession has actually been complicit in shrinking the format’s ambitions to the point where even England’s head coach believes a magnificent home-summer schedule is nothing but a warm-up.

Perhaps it all stems from the reductive ambitions of the 2005 series, which must never be forgotten, the series on which most of the modern myth is based, but which was more of an end than a beginning when it came to English cricket.

The summer of 2005 marked the end of free-to-air television in the UK, the end of Richie Benaud as the voice of English cricket, the end of 18 years of submission in the style of Stockholm Syndrome by one of the greatest test teams ever. . If English sport were to be reused as a series of nostalgic sighs for long-remaining glories, then perhaps only Manchester United’s “Sunshine has won it” moment can top it.

Sixteen years later, what are we left with? The horrors of the modern Ashes experience are even softened into this winter’s TV coverage, just as hampered by greedy decisions taken far above the salary level of the troops on the ground. It is symptomatic of a format whose true essence has been removed from assets since the heyday of rivalry two decades ago, when individual assets were meanwhile sold back to the paying public for a premium.

In fact, it is not unlike a Ponzi scheme – a concept that English cricket unexpectedly became acquainted with during a test match in Antigua back in 2009, when the revelations about the ECB’s old comrade, Allen Stanford, caused a race at his bank in St John’s, with cows stretching farther down the road that anyone stomped to take part in a Caribbean test match of newer vintage.

The warnings about the fragility of test cricket have been legion for decades. But if England, of all the test nations, do not remember to take care of the format that it pretends to hold highest through the hype of the ashes, this winter’s experience has shown that the expertise required to strengthen these standards may not be able to to survive much more neglect.

Andrew Miller is the UK Editor of ESPNcricinfo. @miller_cricket