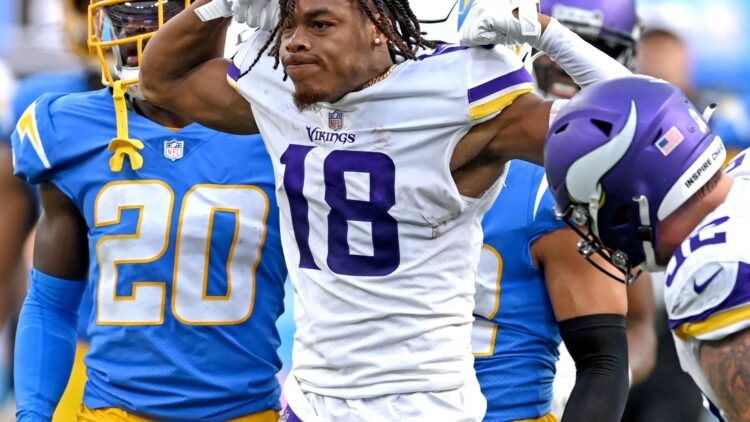 November 14, 2021; Inglewood, California, United States; Minnesota Vikings wide receiver Justin Jefferson (18) flexes into the crowd after holding on to a complete pass for a first down in the first half against the Los Angeles Chargers at SoFi Stadium. Mandatory Credit: Jayne Kamin-Oncea-USA TODAY Sports

Vikings fans, for the most part, have started to turn their attention to the offseason. The team has been officially eliminated from the playoffs, so that’s a pretty reasonable thing to do. What I’m going to suggest, though, is that fans should be on the lookout for one thing this weekend: whether Justin Jefferson can eclipse the 3,000-yard receiving mark in his first two seasons.

If he does, he will be the first player in NFL history to do so. Doing something that Jerry Rice, Randy Moss and all the other greats of all time couldn’t do is truly extraordinary. Of course, it’s notable that Jefferson has the extra game. However, the broader point remains that history is within our grasp.

Last weekend, Ja’Marr Chase broke Jefferson’s rookie receiving record. I have to give Chase credit: the rookie has made some bold promises and has more than delivered. Jefferson, however, is not far behind, previously setting another record by surpassing OBJ’s 2,755 yards in the first two seasons of his career.

The achievement will get a bit more interesting this weekend. The Vikings play at home against the Bears. Fans of US Bank will have very little enthusiasm other than defeating a divisional foe. In fact, there are likely several people in the stands looking for a Minnesota loss. Such a result would lead to a better position in the draft.

Regardless of the outcome of the game, we should all be rooting for Justin Jefferson to surpass 3,000 yards. Frankly, the child deserves better. He is a great competitor and a great talent. Unfortunately, the team has let him down during his first two seasons. Hopefully Minnesota will work things out during the offseason so fans have more cause for joy than mere personal praise.

In fact, I think it’s safe to say that future versions of the Vikings have the ability to have their cake and eat it too. Jefferson, in all likelihood, will continue to play at an elite level, thus positioning himself to continue breaking records. Hopefully that will happen when the Vikings, as a team, similarly rise to an elite level.