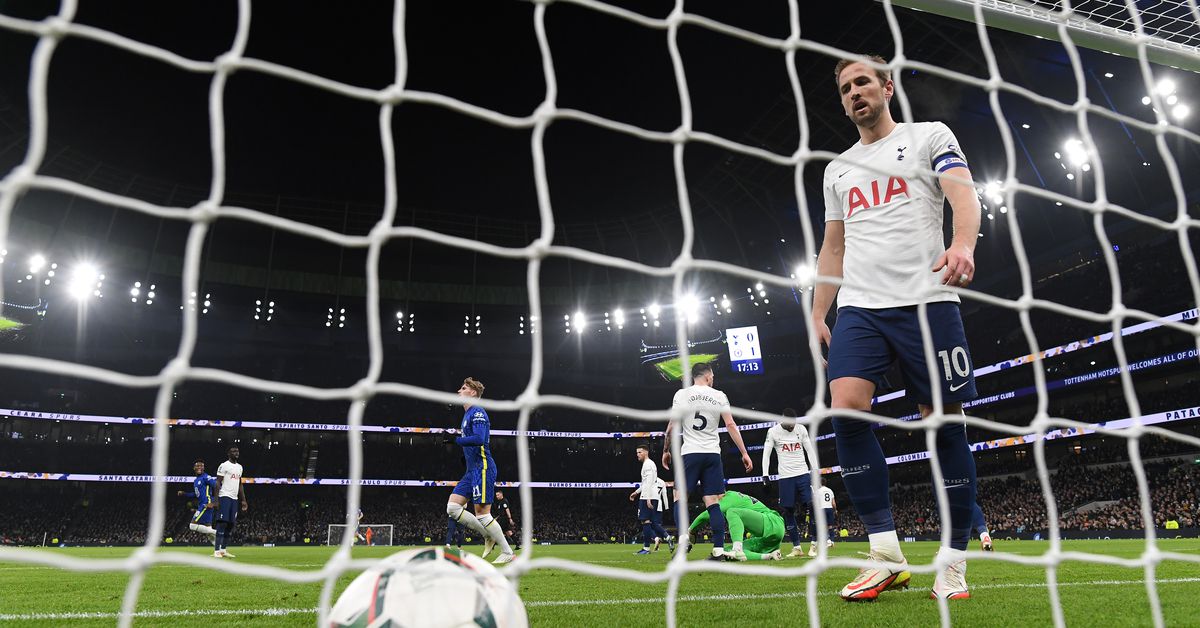 For the second time in a week, Tottenham Hotspur were overlooked by rivals Chelsea. Last Wednesday in the first leg of the Carabao Cup semi-final at Stamford Bridge, it was two Spurs errors in the back that led to their downfall. Despite misplaced passes and unfortunate mistakes leading to Chelsea’s two-goal advantage over Spurs going into the second leg on Wednesday, there was hope the Spurs might be able to score an early goal and put the pressure on at home under the lights.

Instead, any hope for the game was all but gone around 1:45 PM EST when the Spurs lineup was released. Despite a few changes here and there, the lineup alone led many to believe it would take a miracle, a la an Amsterdam one, for Spurs to get things right. Perhaps in large part due to the lack of depth, lack of full investment and injury problems at the club, Spurs once again held on to many of the same second strings that led to disappointing performances from the first leg and the FA Cup vs. Morecambe

As many expected, the Spurs crashed into one of their bitter rivals in a tournament that was arguably their most realistic chance of winning a trophy. The Spurs went into the season with their sights set on winning a trophy in realistically the League Cup, FA Cup and/or the UEFA Conference League. As winning the Premier League is never a distant possibility, Spurs now remain alone in the FA Cup as we approach the half of January.

So after another painful exit in the quest for silverware let’s take a break, step back and rethink this year and what the club can still achieve with a ton to play for with plenty of time left this season.

To start with, there is clearly a sense of doom and gloom around the club at the moment. Their last four games – two against Chelsea, one against Morecambe and one in the league against Watford – have been extremely uninspiring. There are a few different injuries for key players on the squad. In both games against Chelsea, Spurs were unable to bring in defenders Eric Dier and Sergio Reguilon.

In addition, Heung-min Son was unable to play in their second game due to an injury that will keep him out for a few more weeks, while Spurs’ best defender Cristian Romero has been out since the last international break. The good news, however, is that most of Spurs’ injured players should be in the game for the next few days and weeks.

In addition to the injuries, the difficult and tricky transfer window has arrived in January and the Spurs seem – as always – more interested in finding the best possible deals rather than closing their business. Time will tell if this will pay off for the club, but it’s no surprise why supporters are frustrated when clubs the size of Aston Villa act bolder by bringing in players who can immediately improve the squad, such as Phillippe Coutinho and Lucas Digne.

The tea leaves surrounding Tottenham’s transfer prospects mostly have to do with the possibility of Adama Traoré joining, ostensibly as a right-back. Traoré is said to be a bit more offensive compared to Emerson Royal, who came under fire from fans during Antonio Conte’s tenure. The latest around Adama is that the Spurs deal could be a loan-to-buy akin to the deals made by Atalanta duo Romero and Pierluigi Gollini.

In addition to Adama, Conte has said he wants another striker and maybe even another centre-back this window. Supporters have been asking for a little more creativity, but it hasn’t shown up in press conferences or his team selections that Conte necessarily agrees with. With Giovani Lo Celso coming back from injury, the Argentine will certainly have his chances of getting permanently into Conte’s plans.

It also doesn’t help the mood around Spurs that the club appear to be in the process of removing one of the more prized prospects from their youth academy. It was reported on Friday that Blackburn and Spurs appear to be in agreement on 20-year-old striker Dilan Markanday. For a club that has indicated that they are making more use of their youth, the decision to move to one of their more talented clubs seems rather odd.

The ongoing need for outgoing players

The past few games have provided mounting evidence that saying goodbye to a few players is best for everyone involved. The most visible example of this is, of course, Tanguy Ndombele, not only because of his lackluster performance against Morecambe, but also because of his temper and mentality when he was replaced by a fierce reaction from the fans.

Ndombele is really the most visible example of players who have entered the club in recent seasons who have failed to continue and have not proved their worth, and the truth is that the club has to look for a lot of revenue in this window Search. Besides Ndombele, it might be best for players like Matt Doherty, Joe Rodon and even Dele Alli to move on to relaunch their football careers. But with how difficult this window has proven it can be and the high wages Spurs pay some of their players, the number of suitors interested in the aforementioned players among others could be minimal.

On top of all of the above, the scariest thing for Spurs and their supporters is the sudden mood swing at the Italian manager. Prior to the game’s congestion for January, Conte seemed quite jovial during his press conferences and on the sidelines. The team won and clicked and perhaps the Italian manager was expecting some much-needed reinforcements in January as he had spent enough time with the squad by then to know what to bring in. In recent displays perhaps due to some of the recent appearances, Conte looked dejected and despondent. And for a manager like Conte who gives everything and expects the same from all parties he has to deal with at every club, the signs are extremely worrying and the remedies to solve these problems do not seem to be what the club is looking for at the moment.

We don’t have to look long at Conte’s record to know that if he doesn’t reach the same level as he gives, he will run. At Inter, despite having won the Scudetto literally less than four weeks previously, Conte walked away from the title-winning club after reporting that he disagreed with the general direction the club was taking. While Conte insisted during Friday’s press conference that he seems happy and determined to improve the overall situation, the hard truth is that lately Conte had the look of a dejected manager – the same look his predecessors had – so it comes as no surprise why some supporters are again at a boiling point.

As with any professional sport, football and life in the Premier League is all about ‘what have you done for me lately’. Due to all the above issues and limitations around the club, it’s easy to forget that everything the Spurs are trying to achieve this season is still right in front of them. It’s so easy to remember that Conte’s Spurs are unbeaten in his first eight league games with the club, a first for a Tottenham player.

While this run has come at the cost of quite a few lower Premier League clubs, Spurs are just four points behind fourth-placed West Ham with three games in hand. The Spurs left four points on the board after failing to get all three points against 10-man Liverpool and 10-man Southampton in recent weeks, but the club are in the thick of things now that they’re on their way are to a crucial and arguably de facto Top-4 decisive game against rivals Arsenal over the weekend.

With a Top 4 position such a realistic goal and opportunity, chairman Daniel Levy’s trip to the Bahamas to speak with majority shareholder Joe Lewis must have been a discussion based on loosening the wallet for Spurs to get more players to do this. to enter the window. Spurs have been so conscientious about their financial capital over the past half decade, but the club can no longer rely on lightning in a bottle as they did with Mauricio Pochettino when they became a fixture in the Top-4 conversation.

Levy and the board have been labeled “cheap” and for good reason, but a savvy businessman like Levy should know that investing money to make money, especially if you have the right resources, as a world-class manager is for one. for example, a valuable and intelligent business decision. Add to that the fact that Spurs seem to have an interested Harry Kane again and it gives more strength to the argument that Spurs should really go for it.

It’s not as easy as this, but the Spurs do have a ringer with Conte and if the board doesn’t fully support him and get relatively close to the level he needs this becomes a “who knows what could have happened” – conversation as the Italian only signed an 18-month contract with the club. In recent years there has been a fight over Levy and ENIC looking to sell the club, but recent seasons – headlined by the decline in league favors to lack of play in the more premium European competitions – have proven that the Spurs all qualities have a natural beauty on the outside with a rotten core on the inside, as Conte said in his first briefings around the club.

It feels like it is now time for the club to move on and get back to the level they should be operating at. It may not feel like it, but the Spurs have everything they hoped to achieve this season right in front of them. Levy has made progress in improving the team on the football side with the appointment of Fabio Paratici in the summer. So while the original intent has been made clear, nothing will be set in stone if the financial investment does not support it.

Nothing is certain, but with the right players in place there will be no more excuses for Spurs. Should the board provide the necessary finances, it will prove to be the gamble that Spurs’ managers and supporters have been asking for. And if it doesn’t work, it won’t work, but at least the Spurs will have gone for it and that alone would make the supporters happy and heard better. With all of the above said, I’ll leave you all with a quote:

Trying and failing is, at the very least, learning; not trying is suffering the priceless loss of what could have been.

Spurs’ buyer will have no more excuses if they don’t support Conte and give him all the resources he needs – so why not just do it? With Conte at the helm, Spurs have a manager who holds the board accountable. And if they choose the easier or cheaper route, that will only continue with the downturn the club has gone through in each of the past three seasons.