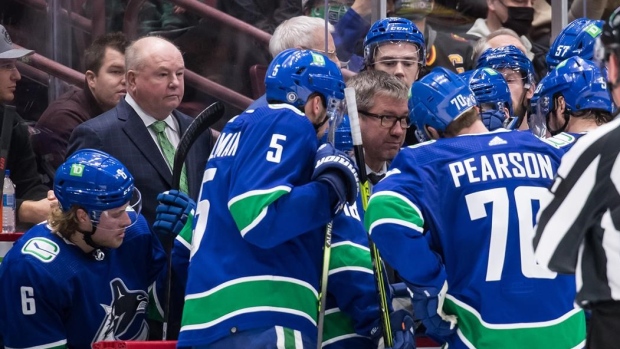 After winning eight of their last 10 games, fans in Vancouver are beginning to wonder if the Canucks – led by new head coach Bruce Boudreau – can fight back in the playoffs. I think the answer is yes.

Let’s put some obvious points aside for a moment. The Canucks cap situation is ugly, and any additions to the list are likely to have to come through cost neutrality. The team’s best player, 23-year-old center Elias Pettersson, is in the midst of an ugly offensive downturn. And even with a whiplash of a rebound since bringing Boudreau into the fold, the Canucks are still well outside the playoffs, playing in a much more competitive Pacific Division this time around.

But this year’s team, no matter how painful it has been at times, is showing progress. Maybe in a meaningful way.

If you’ve seen Canucks from a glass-half-full approach, there are a few things to hang your hat on. The first is that this team is quite credible with steady strength, the absolute most important game mode. Vancouver is this season number 15 in the league in goal difference there (+3), within playoff caliber.

The goals break out accordingly:

This is a critical takeaway, especially if you love the glass-half-full approach. A season ago, a challenged Montreal Canadiens team that sprinted on the mediocre treadmill had shown one core competency heading into the off-season: defending the game with steady strength and driving a favorable goal difference there despite piles of list and execution concerns.

From a staff point of view, this Canucks lineup feels night and day compared to last year’s Canadiens team – you do not think of this lineup, a lineup led predominantly by skilled strikers at the top, as a strong defensive group and weak in the offensive zone. But that’s what they are.

Boudreau and the new Canucks coaching staff are trying to break it down. But compare this Canucks lineup, which has not changed much from their all-Canadian division look a year ago, and you can see the results are significantly different:

Last year’s Canucks team was a mess, finishing -37 goals in 56 games and was generally played out by the rest of the Canadian clubs.

The only area that judged relatively well, funny enough, was the team’s penalty kick, where Braden Holtby and Thatcher Demko stopped 87 percent of shots, though Vancouver finished in 26th place in the expected goals conceded there. Put another way: the goalkeeping saved the Canucks more than the raw goals against the numbers indicate.

This season, the penalty shootout still provides a wealth of space and opportunities for their opponents, assessing death late in expected goals. Demko (82 percent stop rate) has not been able to marginalize that pressure in any way, and so the Canucks have been buried in the position in large part because of how useless the penalty kill has been.

And still! I return to the equally strong defensive nature this season, where the Canucks have conceded fewer goals than all but two teams in the NHL. It is a remarkable achievement, and although it is somewhat goal-oriented, the Canucks are still a respectable 15th place in the expected goals conceded this year. It’s a huge progress year by year, and theoretically it would mean more upward to a besieged penalty kick that hasn’t slowed anyone down this season.

Just look at where Canucks’ opponents get shots from in the offensive zone. It’s not particularly threatening, despite obvious guard restrictions on blueline (via HockeyViz):

I’m still unsure if the Canucks can finish this mid-season rally and chase a playoff spot – if not because they accumulated so many losses early, then for the fact that they play in a division where at least three teams (Vegas, Calgary, Edmonton) is appearing stronger on merit, and the three California teams have all improved year by year.

But the Canucks are building a credible defense under the radar. And armed with one of the better coaches in NHL history, it seems pretty early to count them out.