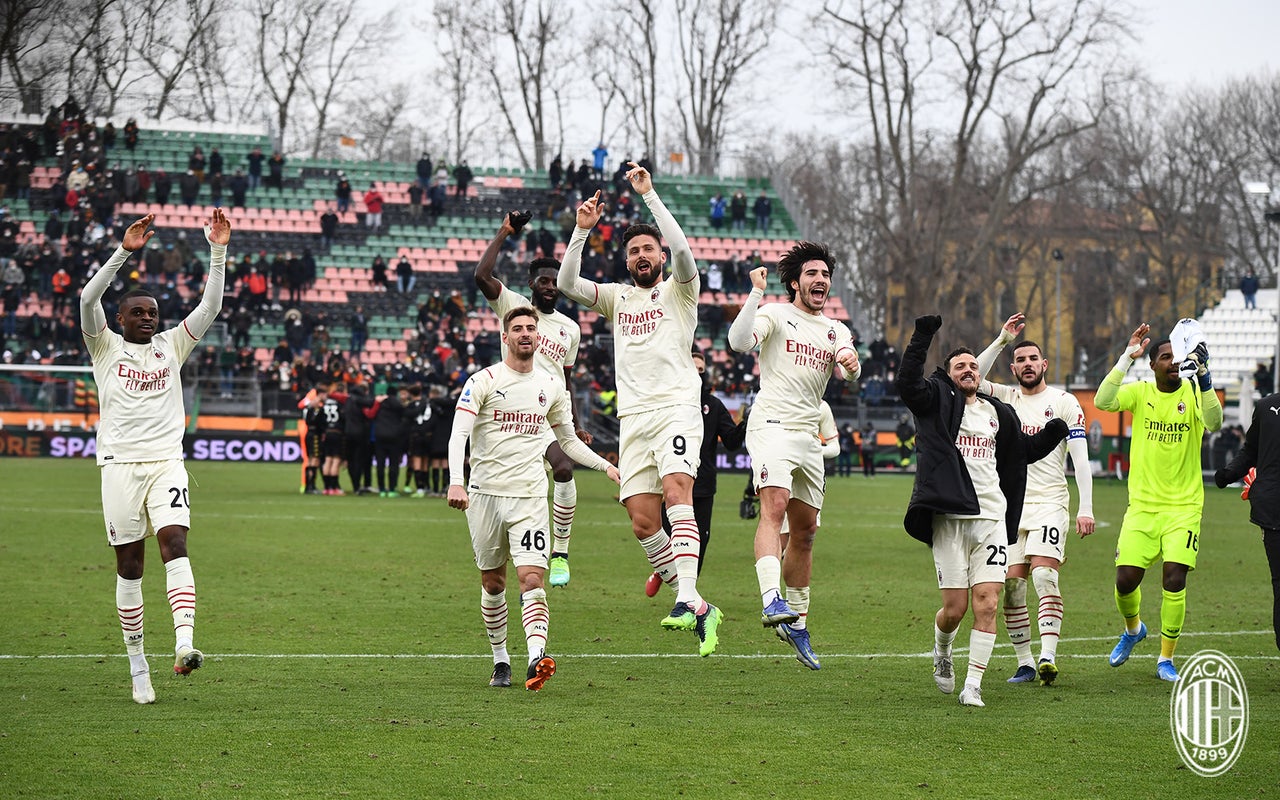 After two consecutive wins, Milan traveled to Venice in a bid to continue the good run and put more pressure on Inter.

Stefano Pioli had to rely on the same players as in Rome with Calabria, Tomori and Romagnoli still out, but the game started brilliantly for Milan, with Ibrahimovic opening the scoring just two minutes into the game. After that, the Rossoneri picked up some momentum and tried to double their lead, but were held to one goal until halftime.

In the 48th minute, Theo Hernandez scored to make it 2-0 and from then on Rossoneri was in complete control of the game, eventually going up one man and scoring the third goal. Pioli will be pleased that his men managed to secure the win fairly early and save some energy for the important matches to come. Here are five things we learned…

What a performance by Theo Hernandez. The Frenchman collected a hockey assist and two goals and was by far the best player on the field, winning our MOTM award.

Theo has been the captain in the last two games and he has adapted well to having the armband as he has been excellent against Roma and Venezia. Defensively, he kept the opponent quiet and wreaked havoc in the vanguard and the left back didn’t give the ball away or make any sloppy mistakes, something he has been guilty of in the past. Theo seems to be back on top form and it’s great to watch.

Another player who came back and seems to be enjoying life is Rafael Leao. we called how much of a game-changer the youngster was? off the bench against Roma last week, but this time he started from minute one and made an immediate impact, assisting Ibrahimovic just two minutes into the game.

He then managed to provide an assist after a nice through ball towards Theo Hernandez and was unlucky not to score a goal himself. With Leao and Hernandez both looking in shape, Pioli can smile like that left side looks pretty creepy for any opponent.

3. Keep up the good work

After a very capable performance against Roma, Matteo Gabbia and Pierre Kalulu continued to impress against Venezia, leaving little to nothing for the hosts to work with.

The Frenchman in particular has barely put a foot wrong and continues to prove how important he is to Pioli. It would be interesting to see if he could manage to secure a spot in the starting XI in the recent future as he is still young and full of potential.

Gabbia was also solid and continues to gain some momentum as he helped his team keep a clean sheet, and while it wasn’t a flawless performance there is plenty of evidence that he is taking advantage of a few minutes and confidence is growing.

It was another game in which Saelemaekers struggled to impose himself but failed, which is a bit concerning, especially as Venezia should have been one of Milan’s easier opponents on paper.

The Belgian has had some good performances when it comes to his attacking contribution, but he has also had some pretty disappointing performances, which is a bit concerning as he can’t find consistency at the high level we’ve seen him. play.

In the second half, when Messias came in, it was easy to see that the Brazilian could bring a little more flair and creativity to the pitch, despite not producing anything breathtaking, although he had credit on the bench from the goal vs. Roma.

5. Time for a change

Brahim Diaz had another disappointing performance in which he didn’t produce anything worth remembering and after watching Daniel Maldini play in the final 15 minutes of the match all fans could probably agree he looked pretty good for the minutes at his disposal.

Therefore, it would not be surprising if Pioli would give him a chance on Thursday evening against Genoa in the cup, among others, and possibly even against Spezia on Monday.

On the other hand, the coach may be forcing Diaz to play more in a bid to regain his form, but it’s been a while since the Spaniard failed to impress and may be the right time to give. give him a break.